Johnny Depp will play a violent criminal in the much-buzzed-about picture directed by Barry Levinson, just one of three competing projects on bad-to-the-bone Bulger. 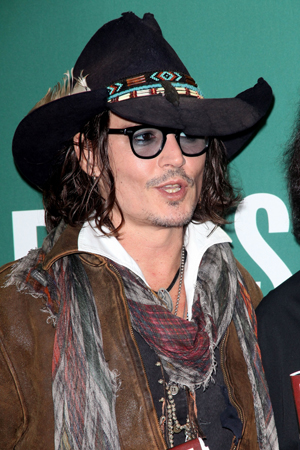 Johnny Depp will play a menacing felon in the forthcoming movie Black Mass, which plumbs the depths of Boston’s gangster culture.

Depp will take on the role of Whitey Bulger, a real-life Irish godfather who was a fugitive from justice for 16 years before being arrested in 2011.

Black Mass, adapted from the book Black Mass: The True Story of an Unholy Alliance Between the FBI and the Irish Mob, is one of three — count ’em, three — Whitey Bulger projects that have been floated in the media in the last couple of years.

Ben Affleck told GQ in 2011 that he was making a Bulger movie with fellow Bostonian Matt Damon as Bulger, Affleck directing and Terence Winter writing the script. Wondering why we mentioned the scriptwriter? It’s because you may know some of Winter’s other little projects, such as, oh, Boardwalk Empire and The Sopranos.

“There are a couple of competing movies and I don’t think it’s been announced yet that we’re doing it,” Damon told GQ. “But the sooner it’s announced the better, just because everyone else will back off, hopefully.”

Peter Facinelli (yes! The vampire dad from Twilight!) has also been working on his own Bulger project, an adaptation of the book Street Soldier: My Life as an Enforcer for Whitey Bulger and the Boston Irish Mob, Zap2it reports.

Sorta makes sense that so many people want to jump on the Bulger story, which had cinematic twists. The criminal was about to be indicted for federal racketeering charges in 1994 when he fled Boston and went into hiding. It was later revealed that Bulger had been an FBI informant since 1975, and that he was tipped off about the racketeering indictment just before it came down.

The fact that an 81-year-old Bulger was arrested in 2011, bringing the story full circle, just makes it more dramatically compelling.

Who wants to see Johnny Depp in age makeup? We do, we do!