The 27-year-old actress is staying busy, and talking about love, life and the outdated traditions of her country. 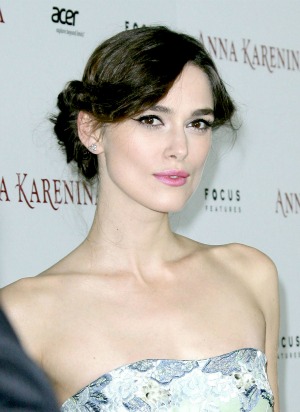 The actress has long shown her love for the royals, and she’s just as excited as anyone over the pregnancy of Kate Middleton, Prince William’s wife.

“I’m over the moon about the royal baby,” she said.

But Knightley adds that she can’t really see a point to the tradition of having a royal family in a country like hers.

“I really can’t mount an argument in favor of the monarchy,” she said, according to E! News. “Is that treason? Do I have to turn in my passport?”

Knightly is four years younger than Middleton, and is engaged to Klaxons keyboardist James Righton. And it sounds like the couple isn’t planning a wedding even close to 2011’s royal wedding.

“I could have six fake weddings,” she told the magazine. “God, that would be expensive. We’re not really big-wedding types. I don’t need to have all that.”

And while many women dream of marrying rock stars, it seems like Knightley is not all that impressed by her future husband’s career of choice… but she’s okay with that.

“I’m not someone who listens to a lot of music,” she said. “But I get wonderful perspective by being with someone who is less like me than more like me.”

She continues by explaining how sometimes opposites attract. It sounds like she knows she and Righton are more logical by having completely different points of view.

“The way he thinks is something I don’t get,” she told Marie Claire. “We come at things from totally different angles.”

Even with wedding planning, Knightley continues to stay busy, and has at least two movies currently filming, including 2013’s Jack Ryan.