Oh, Carson. Just give it up! 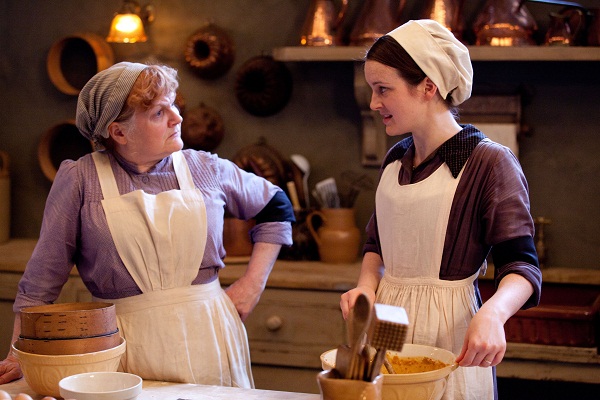 Much like upstairs, the women are revolting against Carson downstairs, too. While it seemed to have started when Anna married Mr. Bates, showing the ladies downstairs that they, too, can have a little fun and maybe earn a real life, it’s been kicked into high gear as they watch the women upstairs grown into their own, too.

Even sweet little Mrs. Patmore took a stand against Carson this week!

After Isobel hired Edith to run the kitchen, Carson became outraged. He forbade the servants from visiting Isobel’s house or helping her or Edith in any way. When Isobel is set to have a nice supper for the Downton ladies, Edith is worried (and rightfully so) that her cooking may not be up to snuff for Lady Cora, the Dowager Countess and the girls. She corners Mrs. Patmore and begs for some help and of course the sweet little lady gives in. She tries to do so in secret, but is eventually caught. Carson has a hissy fit to find that she went against his orders, despite the fact that he clearly has no actual say in what they do outside the house. He immediately runs to tell Lord Grantham about the situation (what a snitch!). Of course, Grantham shows up at Isobel’s and the girls quickly put him in his place. But the whole thing was rather unkind.

It looks like another servant may be flying the coop soon. Daisy took another day off to visit Mr. Mason, William’s father. Mr. Mason told Daisy times were changing and there may not be as much of a need for so many servants much longer. He offered to make her his beneficiary. He wants to teach her how to run his small farm and let her take it over. Basically, Daisy would go from working for someone else to working for herself. She’s being wishy-washy about it, though. She has friends at Downton and, also, a new crush. That said, her crush is in love with the new girl, Ivy. Hopefully Daisy takes Mr. Mason up on his offer and gets out of the basement. Not only would she be revolutionizing because she’s be a woman in charge of land, but she’d also take Anna’s direction one step further by not only moving up in the world but actually getting out of servant’s garb. Is it too good to be true? Even Mrs. Patmore says she should do it.

While we’re speaking of Anna, you should know all her hard work has finally paid off. They got that nasty old woman to tell the truth in front of a witness and it sounds like Bates will finally come home soon! Will Anna still continue to work as a servant then?

Looks like everyone is moving up in the world and the century. Carson had better get himself together or he’ll be left behind!

27 mins ago
by Chloe Castleberry