Super Bowl XLVII brought us a lot of things: A Beyoncé concert, a blackout and plenty of new movie trailers. We’ve rounded up the trailers for all the upcoming blockbusters, and we’re pumped to hit the theater this spring and summer. 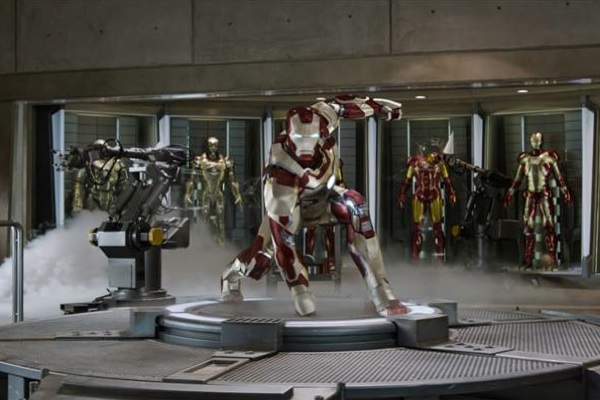 The Iron Man 3 trailer that debuted at the Super Bowl was short, sweet — and filled with a lot of explosions. Basically, all we want in a movie trailer.

So, what’s the upcoming movie about? The synopsis is described as:

“When Stark finds his personal world destroyed at his enemy’s hands, he embarks on a harrowing quest to find those responsible. This journey, at every turn, will test his mettle. With his back against the wall, Stark is left to survive by his own devices, relying on his ingenuity and instincts to protect those closest to him.”

Talk about intense: The Super Bowl trailer for Star Trek Into Darkness is, well, dark and full of mystery. Plus, we get to see close-ups of Chris Pine’s face, so that’s a bonus.

Star Trek Into Darkness: In theaters May 17.

Vin Diesel, The Rock, Ludacris and Paul Walker are back for Fast & Furious 6. The Super Bowl trailer shows the gang spread out all over the globe to track down a gang of mercenaries. Their goal: Earn a clean slate so they can return home.

So, is this the end of the franchise? Guess we’ll have to wait and see.

James Franco is featured prominently in the Super Bowl trailer for Oz the Great and Powerful. The film — a prequel to the 1939 classic The Wizard of Oz — shows Franco’s Oscar Griggs as a man “reluctantly drawn into the epic problems facing the Land of Oz and its inhabitants. Oscar must find out who is good and who is evil before it is too late. Putting his magical arts to use through illusion, ingenuity — and even a bit of wizardry — Oscar transforms himself not only into the great and powerful wizard but into a better man as well.”

Finally! We were most excited to see the new Super Bowl trailer for World War Z. The movie — loosely based on the popular book World War Z: An Oral History of the Zombie War — is how a “U.N. employee [races] against time and fate, as he travels the world trying to stop the outbreak of a deadly Zombie pandemic.”

Which blockbuster are you pumped to see this year? Share in the comments below!

24 mins ago
by Alyssa K. Davis