Between Carson and Lord Grantham, the ladies of Downton were fit to be tied. Those boys didn’t stand a chance, though. 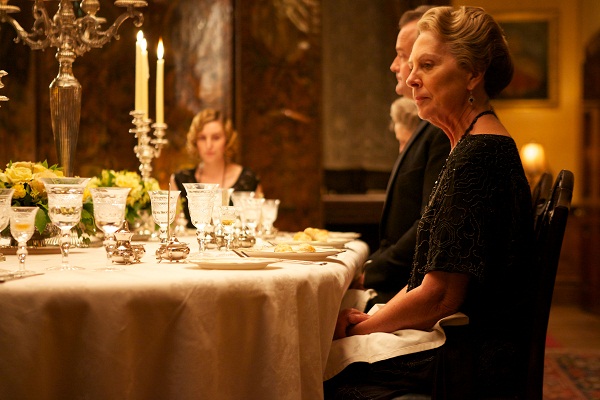 Not much happened on Downton Abbey this week. You know, other than the women completely revolting against the men.

If it sounds strange, it shouldn’t. Every single woman who resides within the Abbey has proved to be at least occasionally headstrong and fiercely loyal. Now, as Downton makes its way into the roaring ’20s, the ladies are finally becoming a little more at liberty to share their opposing opinions. While they waited patiently and did their best to bite their tongues, the minute Lady Cora showed some angst, and the rest of the girls took the opportunity to do the same.

What was Lady Cora so angsty about? The death of her Sybil, of course. She was as mad as a hornet over her husband’s loyalty to the new, fancy doctor from town that she believed played the largest part in her daughter’s death after childbirth. While we understand mourning, the blame game was unbearable by about fifteen minutes into the day. Luckily, Lord Grantham’s mum, the Dowager Countess of Grantham, saved the day by bringing in the local doctor and getting him to admit his options for Sybil were no more sound.

That wasn’t the only thing that kept the girls going toe-to-toe with Grantham.

Isobel invited the girls to supper in order to get Cora away from Downton for a while and perhaps perk up her spirits. As you may remember, Isobel recently hired Edith, the one-time-maid-turned-prostitute. Edith worked her butt off, with the help of Mrs. Patmore’s instruction, to prepare a lovely meal for the women of Downton.

However, when Grantham found out about the situation as Isobel’s house (for more on that, read about what happened downstairs), he flew off the handle. How would it look for his girls to be associating with a former prostitute? When he showed up and demanded they come home, they all refused. Even the Dowager Countess opted to stay for what looked like a scrumptious dessert.

Poor Grantham couldn’t win, not even when it came to his granddaughter. First, he was adamantly against Tom naming the baby after her mother, Sybil. Next, he was outright refusing to let her be christened a Catholic. Once again, though, the girls took him down a notch. Lady Mary told him Sybil had wanted the baby to be Catholic, and everyone agreed that naming her Sybil was a sweet gesture.

Finally, he even lost his case with Edith. After much encouragement from everyone but her father, it looks like she’ll take on the role as a guest writer for the paper.