Once again, the Superdome stood in threat of being flooded… this time with tears. J-Hud and the Sandy Hook Elementary Choir start off the Super Bowl. 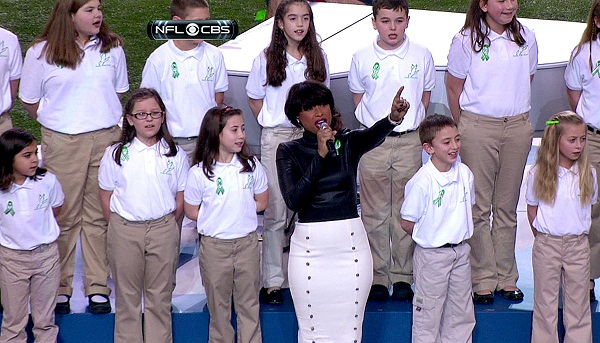 After a tragedy like the Connecticut school shooting, most countries would be happy to erect a memorial for people to sit near from time to time. In America, though, we go all out. Nothing says “We’re better than this incident” like parading a dozen tiny survivors on the field at New Orleans’ Superdome to sing “America the Beautiful” with an American Idol.

There isn’t another group of children this country isn’t more obsessed with than those who attend Sandy Hook Elementary. We love those kids! Everyone wants to know they’re going to be OK. That they’ll continue to flourish and not be held back or damaged because of the awful deeds of one mentally unstable mad man. The game was great. The commercials were excellent. Budweiser’s “Brotherhood” commercial may have made us misty eyed, but Jennifer Hudson and the Sandy Hook Choir’s rendition of “America the Beautiful” had us bawlin’ like babies.

The song was so moving, even the football players got into the swaying. Sure, in some cases you could blame their bouncing on pre-game jitters, but we saw some Niners and Ravens with some pretty good rhythm out there! Meanwhile, Ravens coach John Harbaugh could be seen pulling his daughter a little closer during the performance.

After Hudson and Sandy Hook, Alicia Keys went on to sing the national anthem and Beyoncé gave one stellar performance for the halftime show. Both teams played a great game, too. (Especially the Ravens, obviously.) But there’s no doubt about it in anyone’s mind: Sandy Hook stole the show.