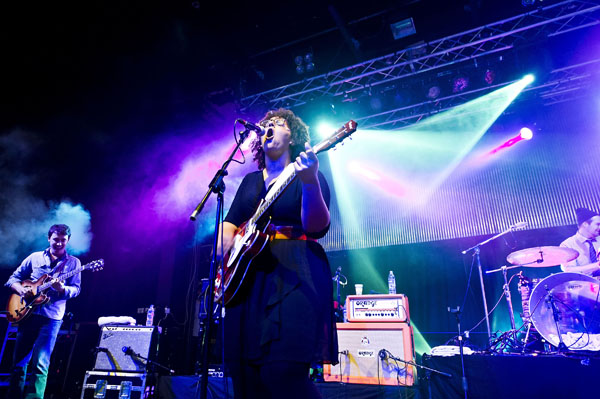 “She was 14 years old, maybe 15,” Howard told Spinner.com in 2012. “She came in the music store with one of her friends. They were looking to buy guitar strings or something.”

They later teamed up with Johnson, but their initial intentions weren’t to form a band.

“I knew that him and Brittany had been playing,” Johnson recalled to Spinner. “I was like, ‘Hey man, you guys wanna jam or whatever?’ So I went over to their little practice space after work one day and worked on some songs over the course of a couple weeks.”

Soon after, things changed. They added Fogg and started getting serious about their sound. At the time, they were both into punk rock, but over time their sound developed into the “roots rock” they’re known for today.

Justin Timberlake will perform at the Grammys >>

Typically, bands tour for years before they get industry buzz, but Alabama Shakes’ ascent was quite fast — NPR profiled them after hearing their debut EP in September 2011, which led to a featured spot at the CMJ Music Marathon a month later. That performance caught the attention of the New York Times, which then led Zales to source their song “You Ain’t Alone” in a commercial.

It would be easy for a band to let the “overnight success” label go to their heads, but Johnson doesn’t think it’s affected them.

“I think if we got sucked into the hype as much as everybody else did, then it could be intimidating, but we try not to think about that,” he told the Austin Chronicle in March 2012. “I won’t say that it doesn’t get intimidating or that you don’t think about it, because you do.

“But you try not to dwell on it, because then you start overthinking, and that’s not what you want.”

The band released their first full-length album, Boys & Girls, on April 1, 2012. The album — backed by singles “Hold On” and “You Ain’t Alone” — spurned a media blitz with appearances on Conan, the Late Show With David Letterman and Jimmy Kimmel Live!.

Oh, and they only closed out the first night of the 2012 Bonnaroo Festival. Quite a feat for a band that only formed a few years ago.

Now comes the 2013 Grammy Awards. The band is nominated in two categories — Best Rock Performance for “Hold On” and Best New Artist.

They’re facing off against heavyweights Coldplay and Mumford & Sons in the Rock category and Fun., Frank Ocean and The Lumineers for Best New Artist. We think their chances of pulling off the “W” are pretty good, but even Howard isn’t so sure they’ll win the prize.

“If I was on the other side of the fence I’d vote for Frank Ocean, personally,” Johnson joked to Rolling Stone after the nominations were announced.