Australian music sensation, Cody Simpson, makes an appearance on the Feb. 4 edition of NBC’s The Biggest Loser. He shares his own stories of being bullied in the internet age. 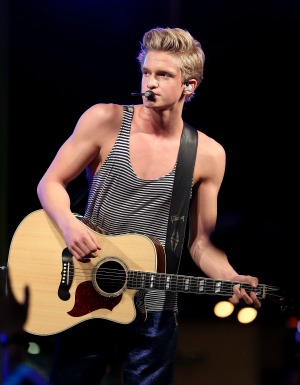 Cody Simpson, age 16, has been taking the teen music world by storm over the last few years, not only in his native Australia but also here in the U.S. Now, he’s set to inspire one of the young contestants on Season 14 of The Biggest Loser with a Feb. 4 appearance on the show. SheKnows was able to speak with Simpson about his appearance and where he’s headed in the music world.

It has to be be tough still being a kid in the public eye and acting as a role model at the same time, but the singer seems to take it all in stride.

He told SheKnows, “When I started to realize I had some kind of voice, an influence amongst young people, I really wanted to take that and use it positively.”

He continued, “I feel very blessed and want to give back as much as I can to kids my age.”

In his appearance on Monday on the inspiring weight loss show, Simpson joins up with contestant Lindsay Bravo, one of this season’s kid ambassadors. Not only is the 13-year-old working to improve her health after a five-year struggle with weight gain, she is also tackling the theme of the week, “Leading by Example.” While Bravo works on an anti-bullying speech for her peers, Simpson steps in to share his own story of being teased.

When asked if it was hard to reveal his own challenges, he said, “Yeah, but I try to be pretty open about it, too, because literally every day online I get hate [from people]. It’s pretty hard to avoid.”

That’s a tough thing to hear from someone so young, but it’s an unfortunate part of being in the limelight in the internet age. Simpson felt it was important to support Bravo and her quest for overall health in her life by talking about his own struggles.

Since the reality show is all about fitness and good nutrition, the teen star knows he needs to keep fit while out on tour. He tries to stay as active as he can with workouts in the gym and has a trainer who comes out on the road with him.

However, he spoke like a true 16-year-old when he shared, “My mom’s always making sure I’m not just eating a bunch of junk.”

Simpson just completed a U.S. leg of Justin Bieber‘s Believe tour, and now the duo are off to Europe for a couple of months. Even though he’s performing with the Biebs, the Aussie is really trying to make his own mark on the music world.

Simpson said, “We’re in a similar category of artists, so I try to be as unique as I can.”

If you think the two teen stars are constantly talking the music biz, think again. When they hang out, it’s “less about music and more about chilling.”

Simpson’s first studio album, Paradise, came out in October, and he’s already in the studio working on the follow-up. He’s definitely finding that his sound is growing up with him, so expect a more mature album when it is released.

It’s not all work for the teen though. If Simpson isn’t in the studio, most likely you will find this surf enthusiast “down at the ocean,” which is his own personal paradise away from his music career.

So, what’s next for the accomplished pop star? He couldn’t have given SheKnows a better answer:

“I want to a better artist and a better person. There’s always room for improvement.”