Justin Timberlake and Janet Jackson’s “wardrobe malfunction” ranks right up there with some of the Super Bowl’s most infamous midgame performances. As for the others topping our list? Not even a Hail Mary could save these halftime horrors. 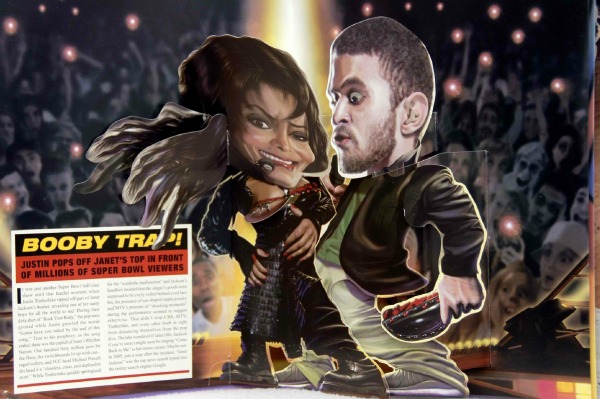 ‘Twas the halftime show that spawned a new catchphrase in pop culture: “wardrobe malfunction.” Who cares that Justin Timberlake and Janet Jackson were bringing the house down prior to Nipplegate? Once JT tore off a piece of Jackson’s top for a little bit of peek-a-booby, we couldn’t remember our names — much less what the h*ll they were singing before that point. The Federal Communications Commission (FCC) had a major hissy fit over the whole debacle, leading to an industrywide crackdown and increased censorship.

When a halftime show is titled “A Small World Salute to 25 Years of the Super Bowl” and is produced by Disney, it’s a safe assumption it might not cater to the football-lovin’ crowd. And who was performing in conjunction with the 3,500 children? New Kids on the Block, naturally. The result was like the Small World ride at Disney gone horribly awry — a dizzying mix of spinning adolescents and bubble gum singles like “Step by Step.” To top it off, the performance was bumped until the end of the game in favor of a special ABC news report about the Gulf War.

When the powers that be hired The Black Eyed Peas to perform the halftime show for Super Bowl XLV in 2011, the Peas looked good on paper — they were at the pinnacle of their popularity, churning out hits like “I Got a Feeling” and “Boom Boom Pow” left and right. When it came time to pony up for their big performance, though, the Peas failed to deliver. Between the strange, glow-in-the-dark ensembles and Fergie singing like a drag queen doing an impersonation of Fergie, this space-age act had football fans wishing it would hop in a Delorean and go back to the future.

Let’s get this straight: During the planning of Super Bowl XXVI, someone thought, “Hmm, let’s pair the ‘Queen of Latin Pop’ with two figure skaters and throw in a bunch of ballroom dancers and giant snowmen for good measure. Now that’s a halftime show!”

Uh, yeah. Not so much. Gloria Estefan, Dorothy Hamill and Brian Boitano’s Christmas-themed extravaganza left the fans in the stands scratching their heads and had everyone yearning for the return of testosterone. This is football, after all — not the ever-lovin’ Ice Capades.