Can you believe it’s been 25 years since the first Die Hard hit theaters? The film that made Bruce Willis a star is getting the royal treatment. 20th Century Fox recently turned one of its sound stages into a 35-foot-tall mural. 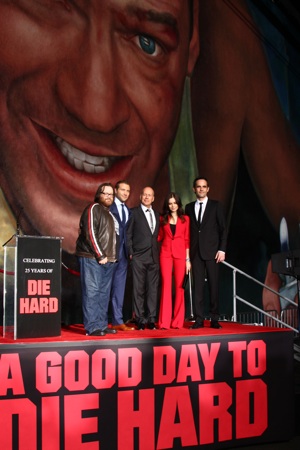 It’s no secret that Bruce Willis got his big break in television. Starting in 1985, he appeared on the prime-time series Moonlighting. For five seasons, he played David Addison Jr. opposite Cybill Shepherd’s Maddie Hayes.

Even though he gained a sizable fan base, nothing could prepare Willis for his leap to the big screen. In 1988, he headlined a little action film called Die Hard. It was a blockbuster that shot him into superstardom. He became an action icon thanks to his role as John McClane.

It’s been 25 years, and McClane’s still at it. On Valentine’s Day, Fox will release Die Hard‘s latest sequel, called A Good Day to Die Hard. The Hollywood Reporter was at the studio lot where the cast celebrated the milestone.

Willis briefly spoke while standing in front of a veiled mural featuring an image of his famous character.

Trailer: A Good Day to Die Hard is a family affair >>

Fox Filmed Entertainment chair Jim Gianopulos presented the actor with the first look at the Die Hard mural. It’s a film that joins The Sound of Music and Star Wars among the studio’s most notable titles.

With the help of some fanfare (Fox’s official theme) and explosives, the sheet was dropped and the mural unveiled. It depicts the famous scene in Die Hard in which McClane is crawling though an air shaft with a lighter.

Die Hard 5 gets a release date: How romantic! >>

The final product was a collaboration between muralist Van Rainy Hecht-Nielsen and painter Fernando Cepeda.