Video of Cameron Russell’s TED talk is making the rounds of the web at record pace, thanks to the many who are curious to hear a Victoria’s Secret model spill insider secrets. Watch below! 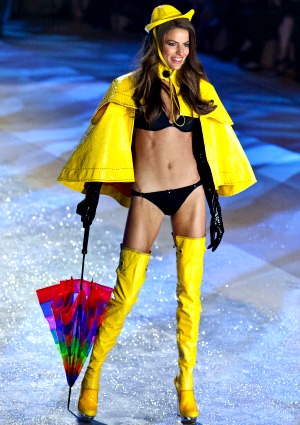 From the moment Cameron Russell took the stage at a recent TED (Technology, Entertainment and Design) conference, the audience was in for something new.

After performing the series’ very first on-stage outfit change, the 25-year-old veteran of the modeling industry (already boasting 10 years and clients such as Victoria’s Secret under her belt) got to truth telling.

“I am standing on this stage because I am a pretty white woman, and in my industry, we call that a ‘sexy girl.’ I am going to answer some of the questions people ask me, but with an honest twist,” Cameron Russell shared.

While showing photos of herself in real life compared to those polished for campaigns, Cameron Russell explained, “These pictures are not pictures of me. They’re constructions. They’re constructions by professionals — hairstylists, makeup artists, photographers, stylists and all of their assistants and pre-production and post-production, and they build this. That’s not me.”

“I am insecure,” the 5-foot-10-inch beauty went on to confess, adding that she’s far from alone.

“Because I have to think about what I look like every day. If you ever are wondering, ‘If I have thinner thighs and shinier hair, will I be happier?’ you just need to meet a group of models, because they have the thinnest thighs and the shiniest hair and the coolest clothes, and they’re the most physically insecure women on the planet.”