The former Miami Dolphins quarterback has long been a fan favorite, but it turns out he has more than the six kids we all knew about. 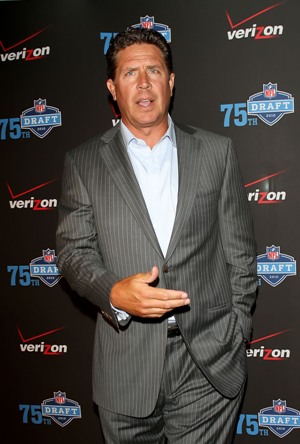 Dan Marino has always been seen as a public figure who could do no wrong. But it looks like he did do wrong and did a good job at keeping it a secret.

The 51-year-old athlete says he is happily married to his wife, Claire — the couple even have six children together. But he admitted this week to fathering a child with another woman less than eight years ago.

“They had an affair, and she had a baby,” a source told the New York Post. “Everything was on the down-low and secretive.”

That woman was Donna Savattere, a production assistant with CBS Sports in Manhattan. At the time of their daughter’s birth, Savattere was 35 years old. Marino has been a pre-game analyst with the network since 2003, which is presumably how the two met.

But unlike couples in some other recent cheating scandals, Marino and his wife are as strong as ever, or so Marino insists.

“This is a personal and private matter,” he told the NY Post in a statement. “I take full responsibility both personally and financially for my actions now as I did then. We mutually agreed to keep our arrangement private to protect all parties involved.”

He sent the statement on his 28th wedding anniversary.

“My wife and I have been married for almost 30 years and have six children together,” he said. “And we continue to be a strong and loving family.”

The newspaper’s source added that he has tried to be a father to the child, even while keeping his parentage a secret.

“They would have impromptu meetings, which was part of the deal,” the source said. “Donna was always saying she had to go meet with her lawyers to go over the scheduling and other issues.”

As we have seen with other couples, cheating is one thing, but a cheating scandal can be all it takes to end a marriage. For now, though, it looks like the Marinos will be staying together.