Kristin Chenoweth has American Airlines in the doghouse after they almost refused to let her board with her dog, Maddie. 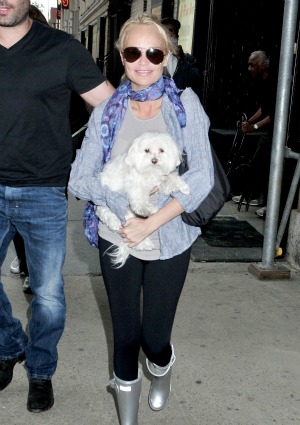 American Airlines is in the doghouse this week with triple-threat actress Kristin Chenoweth. According to People, Chenoweth was flying with her beloved dog Maddie from Dallas to Los Angeles. When she was at the gate with her pooch, an attendant for the airlines refused to let her board the plane.

The petite actress handed over all of the necessary paperwork to fly with her canine companion in the cabin, but that didn’t seem to please the airline employee. Chenoweth was then reprimanded in front of all the other passengers waiting to board.

Sources told TMZ that she was visibly shaken by the incident and even began crying after the agent was “verbally abusive” to the Pushing Daisies star.

Finally, someone from the airline realized that an error was made and she was allowed to get on the plane with her Maltese puppy. However, the story didn’t end there.

Yikes! Of course, the Broadway performer’s loyal fans retweeted the message over 66 times, so the message certainly made it over to American Airlines.

A representative from the airlines spoke to TMZ and said, “We have been in touch with Ms. Chenoweth to offer our apologies for the misunderstanding. We refunded the [$125] cabin pet charge as soon as we realized the mistake. We hope she will consider flying American again in the future.”

Somehow, we doubt she’ll make American the airline of her choice, but we do wonder if she was visiting Dallas resident and current date Jake Pavelka from The Bachelor.