Old people act like teenagers, Kate Upton washes a car, a white guy takes on a “hey mon!” Jamaican accent to cheer up his coworkers and more picks and pans from this Sunday’s Super Bowl commercials. 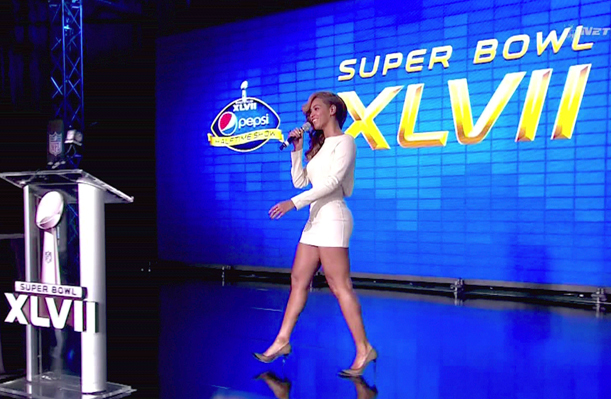 Sometimes, the Super Bowl commercials are better than the game itself. So why not spoil it with these leaked Super Bowl ads?

This almost two-minute spot from Mercedes-Benz pits an everyguy against Willem Dafoe, in a bit of spot-on typecasting as the devil, offering the man a Mercedes and “everything that goes with it” if he’ll sign over his soul. “Everything” turns out to involve posing on the red carpet with Kate Upton, being able to win a dance-off with Usher and competing in a NASCAR race.

*Sigh* It’s more “buy this and you’ll be cool” advertising, but here it is anyway. Fun to hear “Sympathy for the Devil,” anyway.

Upton is all over Mercedes: In another leaked spot, she has a group of men in football jerseys wash a car for her as she plays with her hair.

Seth Rogen and Paul Rudd are called to pitch ideas for Super Bowl commercials to Bob Odenkirk (Saul the lawyer on Breaking Bad), but can’t use the words Super Bowl, 49ers or Ravens. Probably this one was funnier on paper, though Odenkirk does make some funny “shush” faces. What is this commercial for, anyway? Samsung? All righty.

In a painfully icky commercial for GoDaddy.com, Bar Refaeli soul-kisses a nerd, with loud smacking noises sure to turn off any dental-phobe.

“Old people consume product, act like young people” is a tried-and-true advertising trope, but this Taco Bell take is pretty well done. I like the guy who flashes his nipple and leers at the diners.

And Volkswagen has already irritated lots of people with its “get happy” commercial featuring a white guy with a big, broad Jamaican accent. “Who want to come with I?” he asks, loading coworkers into his VW. Ugh.