A man in drag shocked the judges on Thursday night’s ep of American Idol. Who was the mystery blonde? None other than former Idol judge Steven Tyler. 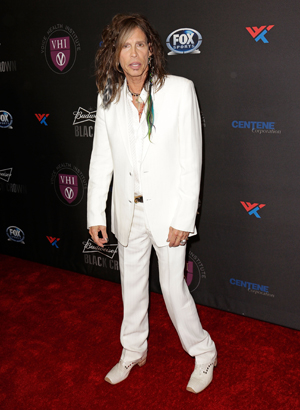 Keith Urban knows a dude in drag when he sees one: The American Idol judge cracked up when a strange-looking blonde walked onstage for Thursday’s audition episode.

“What is your name?” demanded Randy Jackson.

“I’m Pepper!” Steven Tyler replied, in the worst lady-voice imaginable. Dudes: Our voices are just an octave or so higher than yours, no need to do a Betty Boop impersonation.

“I’m going to sing a song called ‘Tell Your Ma, Tell Your Pa, Our Love Going to Grow, Wah Wah,'” Tyler said to the panel. “But before I do I’m going to judge you all [bleeped expletives] first.”

“Steven Tyler is in the house,” said Jackson, who is never afraid to drop “hip” slang from approximately three decades ago. “Has your chest hair grown?” he asked Tyler, referring to the fake breasts that Tyler honked.

Mariah Carey cracked, “This dude looks like a lady.”

Nicki Minaj says she’s not cray-cray, goes on American Idol and proves she is >>

“Do I go through to Hollywood or what?” Tyler asked, whipping off his wig to reveal his own wig-like auburn-dyed hair and pulling the pads out of his bra.

“I just wanted to come by and say hello,” he said to Jackson, Urban, Nicki Minaj and Mariah Carey, before sashaying off stage and mooning the judges.

Tyler and his band Aerosmith did a song called, um, “Dude Looks Like a Lady,” in which a man is confused by being attracted to a woman who turns out to be a man. The deathless lyrics state “Backstage we’re having the time of our lives… Then she whipped out her gun, tried to blow me away.”

Don’t have to be Fellini to get that metaphor.

In his book The Heroin Diaries, former Motley Crue bandmate Nikki Sixx claims that the Aerosmith song was written about lead singer Vince Neil, who apparently does a passable imitation of a woman when seen from behind.