Tim McGraw still looks hot at 45 years old. He credits his sobriety to his great shape and clear mind. 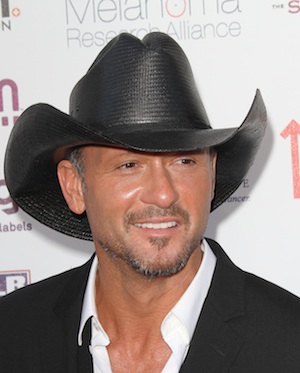 Maybe we have been living under a rock, but it came as a surprise to us to learn Tim McGraw is sober. We didn’t even know he struggled with an addiction. And while McGraw may not have spent any time in rehab, he did discuss his sobriety with People magazine for its February 2013 issue.

Said McGraw on his alcohol use, “I drank a lot from my point of view and I needed to stop.” He continued, “I felt quitting was something I needed to do. I didn’t feel I had any moral high ground with my kids in the long run.”

People magazine reported McGraw said he decided to quit drinking about five years ago when he and his fellow country superstar wife Faith Hill began to headline their Las Vegas shows at the Venetian.

The magazine noted the positive effects of McGraw’s sobriety when it took photographs of him playing basketball with his band — shirtless — and his hot body was obvious.

McGraw told People he enjoys working out and staying active. “Working out is a great way to go out on stage,” he said. “When I hit the stage, my adrenaline is going and I’m ready.”

Continuing with McGraw’s sober message is his new album, Two Lanes of Freedom, out on Feb. 5, 2013. Fans will also get to catch him live when he takes his new music on a 30-city tour in the spring.

Most important to McGraw — and a major motivator for his path to sobriety — is his family.

“I’m in a good place right now,” he said. “I really feel like this new album is not a culmination of the things I’ve done, it’s a new beginning of the things I am going to do. I want to enjoy my career and having my family. I have a busy life, but it is a fulfilling life.”