Roseanne Barr keeps trying (and failing) to resurrect the huge television career she enjoyed back in the 1980s and 1990s. Will a new NBC deal do the job for her? 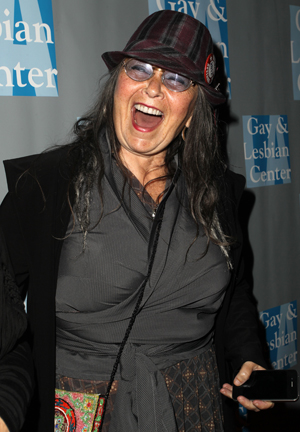 Earlier this week, NBC announced that Roseanne Barr would do a turn on The Office in its swan-song season, but it seems NBC isn’t done with the comedian: Barr has signed a deal calling for her to develop and star in a show for the network.

There’s no word yet on what the show might involve, but Barr will be working with producer Steve Greener, who worked with Barr on her (now canceled) Lifetime series Roseanne’s Nuts, as well as producing Roseanne’s infamous 2012 Comedy Central Roast.

Barr almost did a deal with NBC last year, when the network picked up her pilot, Downwardly Mobile, which starred Barr as a trailer park operator and reunited her with former Roseanne co-star/husband John Goodman.

But ultimately, the multi-camera comedy was passed over, with NBC choosing to focus on new comedies like Ryan Murphy’s gay-dad sitcom The New Normal, and Matthew Perry vehicle Go On. Both shows are still airing, even as other NBC comedies like The Office and 30 Rock are going and/or gone, and misfires like Animal Practice are defunct.

Roseanne Barr to guest on The Office >>

Perhaps the network is hoping Barr can revive the comedy buzz the network enjoyed when NBC’s “Must See TV” Thursday night comedy blocks dominated the ratings through the 1980s and 1990s.

Remember, this was the network that had The Cosby Show, Cheers, Frasier, Seinfeld, Night Court, and Will & Grace. When those shows faded out, NBC then introduced The Office, My Name is Earl and 30 Rock. NBC was television comedy’s 800-pound gorilla. Now? Not so much.

And so, NBC is hoping Roseanne can bring the funny back. After all, her eponymous sitcom aired for almost a decade, and boasted huge, almost-unimaginable-these-days ratings throughout most of that time, 43.5 million viewers at its high point.

Since that time, she has been bouncing around from television (her talk show lasted two years), to live stand-up gigs in Vegas and elsewhere, to bit parts in movies and TV shows.

Speaking of which: Her shot on The Office is to be a three-episode arc in which she helps office manager Andy Bernard realize his showbiz ambitions.

Or, given the tenor of The Office, not.

54 mins ago
by Chloe Castleberry