Vincent. Sweetie. Ya gotta let one of ’em go… preferably the ginger. 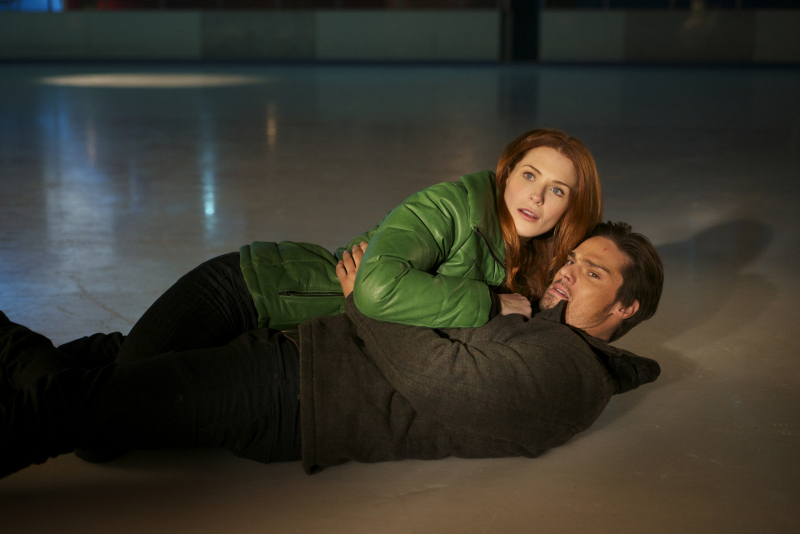 We get it, Alex. You’re perfect. Now put your dang clothes back on! Also, your red hair and pale skin is enough on its own to make us realize you’re supposed to be the opposite of Vincent (Jay Ryan), the bright green coat seems a little unnecessary. Truly.

And keeping Cat (Kristin Kreuk) in all black. Is that supposed to be some sort of artistic statement? Some way of connecting Cat and Vincent and reminding us that they both have dark sides and imperfect pasts? Probably.

Yet, despite those shared darknesses, Vincent is still drawn back to his oh-so-perfect former flame. Of course, she was stealing hospital supplies for a secret clinic for the poor. Who didn’t see that coming? The only way in which Alex is at all “imperfect” is that her perfection blinds Vincent so much that he makes stupid mistakes. You know, like breaking into an ice skating rink for old times’ sake and being flirty and playful on the ice just long enough for the cops to burst in. She’s also imperfect because she’s an idiot when he refuses to give said cop his name. But, Vincent still doesn’t seem to notice it.

Meanwhile, Cat’s forced into therapy to deal with her “PTSD” from being shot. How do we know she has PTSD? Well, according to Beauty and the Beast, it’s because she’s getting bored and wanting to go back to work… things like sweat-inducing nightmares, constantly seeking to control things, or adrenaline rushes are probably better and more serious indicators of post-traumatic stress disorder.

Becoming addicted to video games you would have never played before you were shot: A sign of PTSD. However, saying a known workaholic has PTSD because she’s aching to get back on the job is a little weak, guys.

Anyway, I digress. During her therapy, when her therapist isn’t kinda/sorta/definitely hitting on her, he lures Cat into spilling the beans on her feelings… something she’s usually pretty guarded about. She decides she loves Vincent and is willing to fight for him. The next thing we know, she’s sitting in front of him and confessing just such a thing.

Except Vincent seems already determined to take off and head to BFE with Alex, where they can be doctors and roam foreign lands… as if Muirfield could never possibly find him that way.

And, speaking of Muirfield, Evan’s girlfriend is working with Muirfield. She actually tampered with his samples so that way the cops couldn’t hunt down and get to Vincent before them. Eek. Not good.

Finally, the case this week involved a scorned woman who cut the strings on her ex-lover’s new wife’s parachute. When he wouldn’t cut the strings with his new love, she did it for him. I think Vincent needs to take similar action… but not with a parachute. He needs to figure out which girl he wants and then cut the cords that keep him connected to the other one.

Do you think he’ll really do it, though?

More on Beauty and The Beast