Reports said that Sharon Stone called it quits with Martin Mica just after the holidays, but the two were spotted holding hands in Beverly Hills Wednesday. What gives? 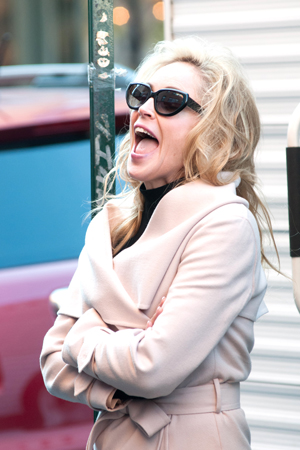 “She called it off just after the holidays,” a source told Life & Style. “It wasn’t so much the age difference. They didn’t share the same interests. Her passions are philanthropy, politics, activism — he wasn’t into any of that.”

Life & Style also quoted the source as saying “Sharon is so busy. She has three sons and that keeps her hands full and still travels a lot for work.”

Work? Yes, work! Apparently, the Daily Mail reports, the actress has seven movies either in production or soon to be released, one of which is the buzzed-about Linda Lovelace biopic with Amanda Seyfried. Stone plays Lovelace’s horrified mom.

Who knew Stone still had so much going on? Her sons are also quite young (Roan is 12, Laird 7 and Quinn is 6, reports the Daily Mail), so she probably is indeed the busy lady.

But Mica and Stone proved the naysayers (and Life & Style) wrong when they showed up on a shopping trip in Beverly Hills Wednesday afternoon.

Stone, in skinny pink cords and a military-styled black jacket, looked years younger than her age; the pair was photographed holding hands and smiling, as well as hugging.

The timing on the PDA is odd. The very day reports surface you’ve split is when you go out shopping and canoodling in Beverly Hills? Huh.

Of course, the two haven’t been averse to papped PDA before. Back in May they kissed on Venice Beach as flashbulbs snapped and everybody looked.

But it can’t be denied that the pair look good together, and if they’re still making rainbows and sunshine, then rock on, Stone and Mica. Hey, geology!