Eva Longoria may be single after ending her relationship with Mark Sanchez, but she’s got good company. The actress reveals to Cosmopolitan for Latinas who she’s living with now. 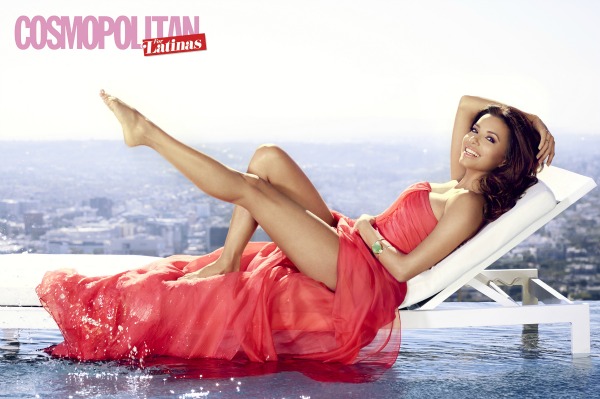 Eva Longoria is looking both leggy and lovely inside the pages of Cosmopolitan for Latinas. Covering the Spring 2013 issue, which hits newsstands Feb. 5, the actress happily talked about both life at home and causes close to her heart.

The 37-year-old, who split with football star Mark Sanchez last October, shared, “I grew up with three sisters and love a full house. I basically live in a sorority house now.”

Keeping up that sisterly connection is a way of heeding the best piece of advice Eva Longoria ever received from the woman who raised her: “My mother gave me one piece of advice that’s always stuck with me. Don’t forget where you came from.”

Looking forward, the actress has her sights set on building both her involvement in politics, and the Eva Longoria Foundation, which “helps Latinas build better futures for themselves and their families through education and entrepreneurship.”

“Latinas make up the largest labor pool in this economy,” she explained to Cosmopolitan for Latinas. “I want to invest directly in their success.”

“I’ve been studying the Constitution for myself but also as a way for me, as a Democrat, to comprehend the Right,” the former Desperate Housewives star added of reading up on American democracy.

“I think it’s important that people who are politically active understand both sides. One of my biggest pet peeves is speaking out of ignorance.”

Check out the Spring 2013 issue of Cosmopolitan for Latinas for more from Eva Longoria, including her golden relationship rule!

Image via Cosmopolitan for Latinas