We’ve got a first look at the Iron Man 3 promo that will run during the Super Bowl. In other words, you no longer need to watch the game. 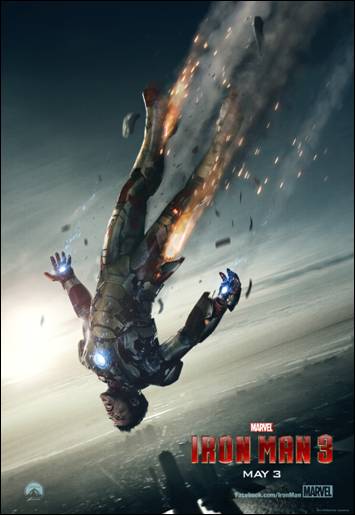 Things are about to get really ugly for the brilliant industrialist Tony Stark (Robert Downey Jr.) and his superhero persona, Iron Man.

In the blink of an eye, Tony’s world is destroyed, reduced to nothing more than rubble. After that, he goes from Avenger to Revenger as he sets out on a harrowing quest to find those responsible for the newest mayhem caused in his life.

But how do you fight an enemy who has no code of honor and no limitations? Every step of the way will be a test to his determination, strength and character.

Left to his own devices, it’s time for Tony to put his genius not into new inventions and making more money, but into rescuing the people he loves. The more he fights, the more he discovers the answer to his most burning question: Does the man make the suit or does the suit make the man?

Aside from the awesome new poster that was shared with us, we also have a (very) quick look at the new trailer that Marvel will release during the Super Bowl. Who knew that so much could happen in just 10 seconds?

It might seem hard to believe it, but our ultramodern hero was actually first brought to light in 1963, when he first appeared on the pages of the comic book Tales of Suspense (#39). Five years later, people loved Iron Man so much that he was granted his very own comic book series.

In May 1968, The Invincible Iron Man (#1) was released. Tony Stark went on to make boys jealous for nearly half a century before the first Iron Man movie was made, starring our beloved Robert Downey Jr. Then he continued to make boys jealous, but he also made the ladies (and probably some guys, too) swoon.

To see even more of the awesome new trailer, tune in to the Super Bowl. If you have more important things to do than watch the Super Bowl (perhaps you have your own arch enemy to conquer), don’t worry: It’ll probably be posted online before the dust settles on the field.

In Iron Man 3, Tony Stark is paranoid and traumatized
Iron Man 3 and Thor: The Dark World 3D plots
Jessica Chastain to sex it up in Iron Man 3