The man behind Emma Stone’s breakout hit, Easy A, is directing Annie. Will Gluck has landed the coveted job. But while he settles in, star Willow Smith has vacated the title role. 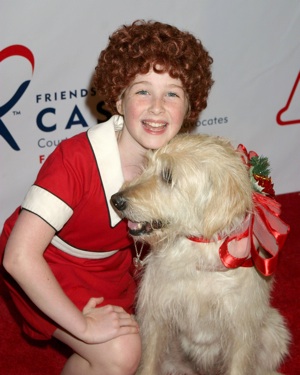 Sony has found a visionary to breathe life into Annie. The classic musical, which has been adapted more times than we can count, has a director. According to EW, Will Gluck will helm the new film.

For the past few years, Annie’s been in development at the studio. It’s a collaboration between rapper Jay-Z and Will Smith and Jada Pinkett Smith’s Overbrook Entertainment. Jay-Z will produce the soundtrack, which is ironic considering one of his biggest hits sampled, “Hard Knock Life.”

“At the helm of Annie, [Gluck] will bring to this film all the charm of the original Broadway production while also appealing to a new generation,” Doug Belgrad, president of Sony’s Columbia Pictures, and Hannah Minghella, president of production for the studio, said in a release.

Gluck will tweak the screenplay originally written by Emma Thompson, and rewritten by Aline Brosh McKenna.

The behind the scenes talent has come together nicely, but they still need a star. Willow Smith was initially attached to play the title role, but has since aged out. She was nine years old when the project first came around. At age 12, she’s now too old for the part.

Annie has been adapted for the stage, big screen and television. The character was played by Andrea McArdle in the original 1977 Broadway production. Aileen Quinn filled the role in the 1982 film, while Alicia Morton took over for the 1999 made for TV movie.

Annie is slated to hit theaters in 2014.

Who do you think should play Annie?