Brooke Hogan thinks it’s just fine for her dad to tweet photos of her body, and she’s ready to take on anybody who feels differently. 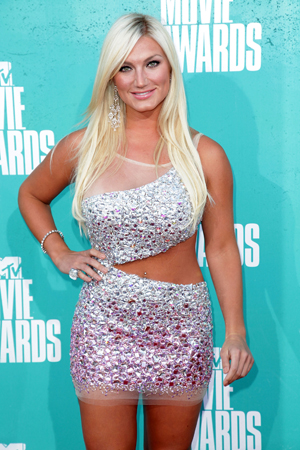 “A dad can’t even be proud of his daughter without sickos makin it something it’s not,” tweeted an angry Brooke Hogan after respondents criticized a photo Hulk tweeted of Brooke lying back in a chair with the caption “Brooke’s legs.”

Yeah, Brooke! It’s totally normal for a dad to invite a universe of Twitter users to admire your daughter’s legs!

Here’s a newsflash: While it is extremely normal for a dad to be proud of his daughter, usually a dad would want to tweet, oh, a graduation picture. Or a wedding picture. Or, in fact, any picture at all where the focus wasn’t on her body parts.

Most dads would want to tweet pictures of their daughter’s face rather than their legs, but hey.

The second part of Brooke’s tweet was even more head-scratching: “Go back to your farm animals. #ignorant.”

Did Hulk Hogan have a gay fling? >>

Hulk Hogan, a former WWE wrestling champ and reality star, has been taken to task before for giving his daughter an unsettling brand of affection. In 2008 a photo of Hulk applying suntan lotion to his then 18-year-old daughter’s bikini’d butt caused internet disgust.

Michael K of Dlisted pointed out then that Hulk’s girlfriend, who was with Hulk and Brooke at the pool where the infamous lotion pictures were snapped, was wearing a similar bikini to Brooke’s.

“Hulk probably got confused on which skank he was rubbing down,” snarked Michael K.

Brooke defended her dad in 2008 too, telling Us she didn’t have a problem with the photo.

“I know I’m a grown woman, but it’s like he’s touching an old car,” she said.