Rihanna and Chris Brown are back together, the star confirms, and she could not care less what you think about it. 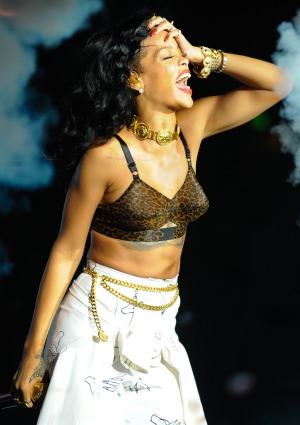 Rihanna knows that the world is scratching its collective head over her decision to reunite with Chris Brown — and frankly, my dear, she doesn’t give a damn.

“I decided it was more important for me to be happy,” she said in an interview with Rolling Stone. “I wasn’t going to let anybody’s opinion get in the way of that. Even if it’s a mistake, it’s my mistake.”

Rihanna gets her own reality show >>

“After being tormented for so many years, being angry and dark, I’d rather just live my truth and take the backlash. I can handle it,” she added.

Chris Brown famously beat the crap out of Rihanna in a parked car the night before the Grammys nearly four years ago. The police photos of the pop star’s battered and bruised face, complete with black eye and split lip, shocked her fans — but nothing shocked them more than the pair reigniting their romance.

“When you add up the pieces from the outside, it’s not the cutest puzzle in the world,” Rihanna told the mag. “You see us walking somewhere, driving somewhere, in the studio, in the club, and you think you know. But it’s different now. We don’t have those types of arguments anymore. We talk about s***. We value each other. We know exactly what we have now, and we don’t want to lose that.”

How does she know he won’t snap and hit her again? She doesn’t, exactly, but she’s kinda sorta pretty sure he won’t.

“He doesn’t have the luxury of f***ing up again,” she said. “That’s just not an option. I can’t say that nothing else will ever go wrong. But I’m pretty solid in the knowing that he’s disgusted by that. And I wouldn’t have gone this far if I ever thought that was a possibility.”

Read the complete interview with Rihanna in the new issue of Rolling Stone, available Friday, Jan. 31.