Alec Baldwin is going to be a dad: Baldwin’s new wife, Hilaria Thomas, is pregnant and showing off her baby bump! 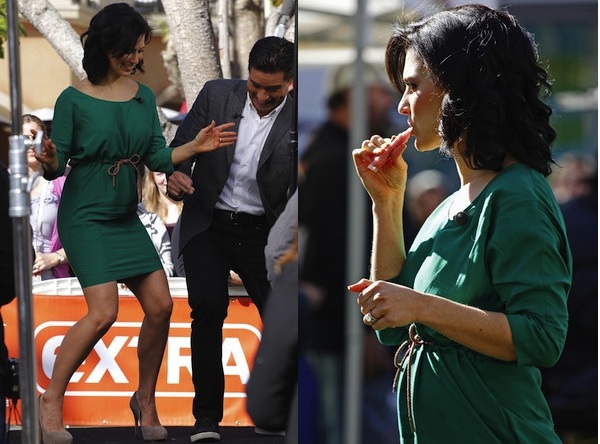 Alec Baldwin is going to be a dad! A source for In Touch magazine says Baldwin and wife Hilaria Thomas are expecting their first child, though it’s not clear how far along she is in her pregnancy. While Baldwin has yet to confirm the pregnancy news, if Thomas is pregnant, it would seem the nearly 30-year age gap between the two isn’t a fertility issue. (Alec is 54 years old; Thomas is 28 years old).

Major media outlets picked up the story that Baldwin and Thomas are expecting late Tuesday evening. Baldwin’s publicist, Matthew Hiltzik, released a statement to the press via Twitter about the Baldwin/Thomas pregnancy rumors.

“Our response to baby speculation over the past 18 months has remained the same — when/if @ABFalecbaldwin and @HilariaBaldwin have news they want to share, they will share it. Until then we have no comment.”

Despite avoiding the issue, the slim Thomas clearly appears to have a baby bump in recent photos (see above). Speculation that she is pregnant moved into overdrive when she tweeted a quote that seemed to imply she was in fact expecting a baby — albeit in a subtle manner. Tweeted Hilaria, “When love and skill work together, expect a masterpiece ~ John Ruskin.”

In Touch magazine said it has photos that clearly show Thomas is pregnant at her recent SAG Awards appearance to support Baldwin, and her recent appearances on Extra! seem to show an early pregnancy.

The magazine reports the couple’s friends already know she is pregnant. Said their source, “She has not said much to anyone as far as how far along she is. She is so healthy and a yoga freak, so everyone could tell right away something was different.”

Alec Baldwin gives some fatherly advice to an actor in trouble >>

Baldwin has openly talked about wanting to be a dad again, so the fact that his new wife is pregnant doesn’t come as too much of a surprise. He sat down with Piers Morgan last year and gushed about the thought of becoming a new dad.

While we should probably wait until Alec Baldwin and Hilaria Thomas officially confirm pregnancy rumors, we send our best wishes to the happy couple a bit early.