Jack walks into Rizzo’s trap, the Milwaukee hit man escapes again, and Dixon finally gets to be play the hero.. for a few minutes. 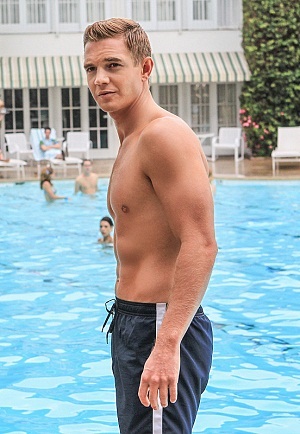 Let’s be honest: Jack and Mia’s dangerous love affair is really what’s driving this show right now. While, we all love Ralph and his stubborn cowboy justice, it is the new couple’s steamy romance that leaves us on the edge of our seats. After the last episode’s cliffhanger, we finally find out what’s to become of Jack!

It’s a little intimidating for every guy when his girlfriend’s dad sits him down and questions him about his “intentions” with the dad’s daughter. But, it’s a whole other story when that dad is short-tempered mobster Johnny Rizzo.

Even though Savino (Michael Chiklis) warned Jack (Jason O’Mara), he still managed to walk right into Rizzo’s trap. Lured into a house by a damsel in distress/drug addict, Rizzo emerges from the shadows and Jack never saw him coming. Rizzo immediately kills off the addict with that same deadly dose of drugs he gave Diane Desmond, and then turns his unwavering attention to Jack.

With Jack restrained, Rizzo tortures him for information on how Mia (Sarah Jones) became the rat. Between screams of pain, Jack is able to convince Rizzo that’s he’s been set up and Mia is innocent. With nothing else to gain from the exhausted deputy, Rizzo pulls out his gun. Just seconds before Rizzo is about to kill Jack, the addict we thought was dead jumps to life and stabs Rizzo in the neck. But, like most villains, he doesn’t die! Instead in Western showdown fashion, he reaches for the gun on his hip, but Jack gets the draw on him just in time and kills him. Oh man, this is bound to complicate things with Mia.

The Milwaukee hit man is at it again

The Milwaukee hit man, Mr. Jones, has been kicking it behind bars the past few episodes, but managed to escape when ADA Katherine O’Connell requested his help to take down Savino. Well, this mass murderer isn’t such a trustworthy fellow and managed to escape, killing two guards in the process. Although Katherine and Sheriff Ralph Lamb (Dennis Quaid) do their very best to find him, it is Savino who accidentally takes him down. But, he’s not sending this slippery sniper back to prison. Instead, Mr. Jones now works for, or perhaps the correct phrase is “owned by” Vincent Savino. Lucky him.

Dixon steps up to the plate… and, well, got on base

And poor Dixon. He finally got a chance to be the lead on a big case when he saved a drowning singing sensation, Faye, who also happened to be poisoned. But, after partying and shacking up with her, little Teentastic, turned out to be the bad guy. She meant to poison her sister, but wound up accidentally poisoning herself. Oops. The silly things sibling rivalry will drive us to do. Can’t imagine Dixon will be heading up any investigation involving a pretty 18-year-old again any time soon.