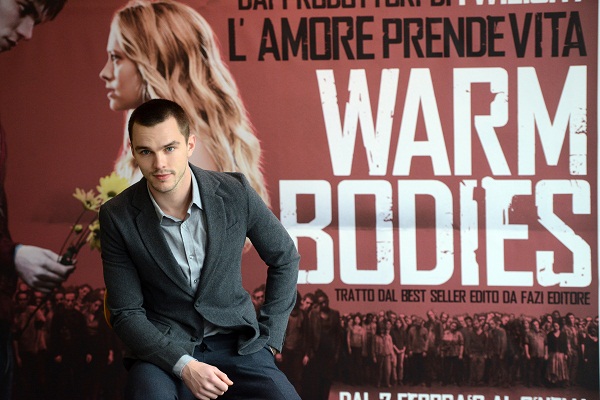 I know, I know. It’s hard to tell just how cute Nicholas Hoult might be with all that make-up on him to make him look undead. Lucky for you, you can catch a glimpse of him looking much more alive on Wednesday’s episode of Jimmy Kimmel Live.

Hoult, the 23-year-old cutie from England, is currently starring in two unique and awesome movies.

He’ll be on Kimmel to talk about the much more popular and publicized Warm Bodies. In the movie, Hoult plays a zombie who is slowly coming back to life as he falls more in love with a living girl. From the looks of it, Warm Bodies seems like a really awesome spin on a rom-com. Watch the first four minutes…

His other movie looks pretty epic, too. It’s called Jack the Giant Slayer and is a modern twist on an old fairy tale. (I’ll let you guess which one.) Hoult plays Jack, a young farmer who must go head to head with the giants when the longstanding peace between them and normal-sized people is threatened. 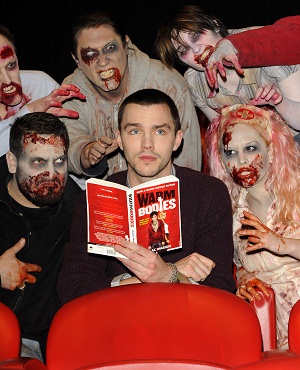 If Hoult looks familiar, he should. He’s been in nearly everything. You most likely remember him as the kid who starred opposite Hugh Grant in About a Boy. Yes. That’s the adorable little boy who wandered down the school hallway singing to “Shake ya a**.” He went on to star as the always up to no good Tony in the beloved British young adult drama, Skins. (It’s available on Netflix. Just watch it.)

After Warm Bodies and Jack the Giant Slayer, you can catch him on the upcoming X-Men: Days of Future Past, as well as Mad Max: Fury Road. He’s adorable and he’s a great actor (much better than RPatz).

In the meantime, catch Jimmy Kimmel Live on Wednesday night and search your DVRs… he might turn up on some of the other late night shows throughout the week in a promotional effort for Warm Bodies.