Refreshingly real-acting Jennifer Lawrence cringes and rolls her eyes when her mom talks about her. 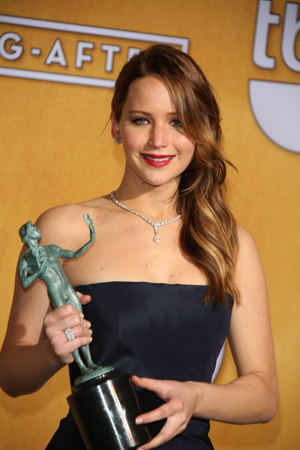 Jennifer Lawrence doesn’t like it when her mom cries.

The world found that out when Entertainment Tonight aired an interview with Jennifer Lawrence and her parents, Karen and Gary.

The pair were justifiably proud of their 22-year-old daughter, and weren’t afraid to tell Entertainment Tonight all about it.

“I’m so proud,” Gary said of his daughter backstage at Los Angeles’ Shrine Auditorium after the Screen Actors Guild Awards. “I feel like I’ve got the Secretariat in the Derby.”

“Your dad just called you a horse!” said ET‘s Nancy O’Dell, as Lawrence covered her face.

Lawrence’s mom, Karen, hoped to be discreet: “I don’t have anything to say because we’ll embarrass her,” said Karen. “We always do.”

Karen continued, “I’m so proud because she’s remained who she is throughout this whole process and it hasn’t changed her. That’s what I’m proud of. I don’t care whether she wins or loses necessarily, but because she won and she’s stayed strong and true to herself, that’s what makes me proud.”

Yep, that’s a 22-year-old, all right. She probably gets embarrassed when her parents dance, too.

Lawrence, who won Outstanding Performance by a Female Actor in a Leading Role for Silver Linings Playbook, had another embarrassing moment on SAG night when she pulled up her skirts to walk to the podium and a strip of sheer fabric on her dress made it look like the bottom had ripped and was in danger of falling off.

Hmm, walking up to an awards podium and your dress falls off. Now that sounds like a teen-humiliation dream come true.

Lawrence told ABC News’ Chris Connelly after the incident that “somebody’s chair got stuck on my train or somebody’s foot or something. I will never look at pictures of this night. That’s the only true way to happiness.”