Karrueche Tran exposes herself… and her relationship with Chris Brown. The Vietnamese beauty, who recently posed topless for the cover of Rolling Out magazine, is moving on and growing up. 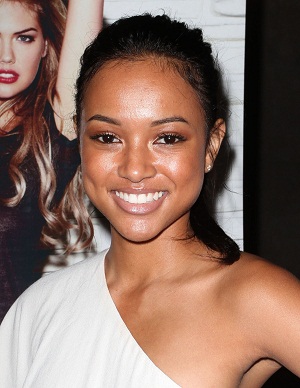 During her recent shoot for Rolling Out magazine, Chris Brown‘s ex, Karrueche Tran chose to bare all… physically and emotionally. Tran wants her ex to know exactly what he’s missing.

She also shared that dating Brown was far from fun. Would you like being stalked by paparazzi, having strangers hate your guts for no reason, and being caught up in a messy love triangle? Um, no.

In the shoot, Tran goes topless. The only thing keeping her covered is some strategically placed long hair… and a fancy necklace. At best, you could say she looks good. At worst, you could take notice of the bathroom-like setting and decide the shoot is a little reminiscent of all those Facebook self-pictures taken in the bathroom mirror. No amount of pearl necklaces can make those classy.

That probably wasn’t her choice of a location and we’re sure the picture will still leave Breezy hiding behind his laptop.

During her interview, Tran, 24, talks about life with Brown and the paparazzi who swarmed her… even if he was miles away.

”…The paparazzi would take pictures and follow me when I wasn’t around Chris [Brown],” she told Rolling Out. “I was like ‘Chris is not here, why are you following me?’ But I was constantly seeing myself on blogs and websites. It was kind of weird.”

Of course, they were following her. She was dating one of the least loved yet somehow still popular R&B stars in the country. They were probably looking for bruises in nearly every photo. Plus, there was the issue of how he kept running back to his “friend”/ex-girlfriend Rihanna.

She’s in a better place now, due in part to her new level of fame, and thanks to her relationship with Brown. Emotionally, she recognizes she’s a lot better off.

“I’ve learned to find happiness within myself,” she told the magazine. “I’ve also built a strong core.”

To read more of her thoughts on life with and after Chris Brown, find out about her clothing line, The-Kill, and see those pictures, read the entire article on RollingOut.com.