We’re more than a little obsessed with this show and they haven’t even filmed an episode yet. Adding to the hype, we now have the name and face of Cory and Topanga’s daughter! 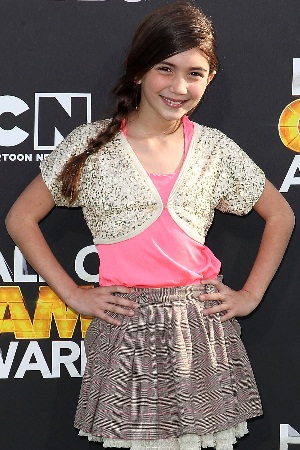 Entertainment Weekly announced last night that the people in charge of the sequel to Boy Meets World have cast the lead role. Cory (Ben Savage) and Topanga (Danielle Fishel) Matthews’ daughter will be played by 11-year-old Rowan Blanchard.

Rowan’s resume is small, but impressive. The young actress starred alongside Jennifer Lopez in The Back-up Plan. She also starred as Rebecca Wilson in Disney’s Spy Kids: All the Time in the World 4D. That means she’ll be somewhat recognizable to the new generation of kids who are about to become Boy Meets World fans, without being over-the-top-famous.

As for why she was chosen, the show’s producer, Michael Jacobs, explained it pretty simply to EW:

“As soon as Rowan walked into the room, I was reminded of why Ben Savage was loved as Cory Matthews,” he said. “Rowan is real and accessible and I am hopeful this girl is about to meet a world that will love growing up with her as well.”

Just a reminder: The sequel will be called Girl Meets World and will focus on Riley Matthews, Cory and Topanga’s daughter, as she grows up and navigates through life… just like Cory and his pals in the original show Boy Meets World. The show was announced only a couple months ago, but so far Disney has managed to score back Fishel and Savage to reprise their roles as Cory and Topanga, though this time as parents.

While we hope to see guest appearances from other Boy Meets World originals, we know this new story isn’t about Cory and Topanga, but about Riley. We’re still desperately clinging to a return from Mr. Feeney, though!

Don’t start searching the DVR yet, though. They just found Rowan and according to EW, filming for the pilot doesn’t start until next month. Then the show must still be approved (though, why wouldn’t it?!) before Disney is likely to add it to next year’s schedule. At the earliest, we’re probably not likely to see the first episode of Girl Meets World until late summer or early fall.