Dallas is back for Season 2 and Julie Gonzalo opens up about Pamela Barnes, her character’s true feelings for Christopher and why she’s not a villain. 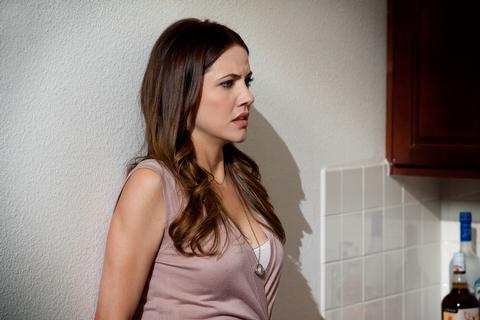 Julie Gonzalo knows drama. Last season she took con-artist to a whole new level when she portrayed the beautifully manipulative Rebecca Sutter on TNT’s hit series Dallas. Rebecca went to great lengths to get exactly what she wanted in Dallas,  which included concealing her identity and marrying the prince of Southfork, Christopher Ewing (Jesse Metcalfe).

By the finale, Rebecca’s secrets were revealed, including her true identity as a Barnes (the family that’s been feuding with the Ewings for decades)! Not to mention, she’s pregnant with Chris’ babies. Awkward.

Back for Season 2, Julie gives SheKnows a little taste of what to expect from Southfork’s woman we love to hate! 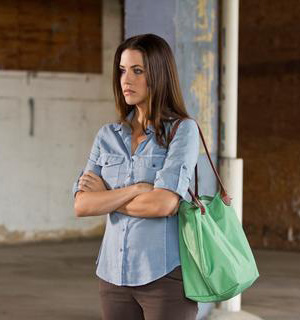 “You can expect the truth from her this time around,” Julie told SheKnows, “She’s coming clean to everyone. And this is who she’s going to be. So you finally get to know this character for who she is truly is.”

Which is fantastic since last season she fooled everyone on Southfork, especially Christopher, which left the audience wondering if the devious Rebecca ever really loved the handsome Ewing?

“In the first season she really was in love with Christopher. You know, she really did fall for him,” Julie says. But, with all the baby and undercover Barnes drama, is there any hope for this couple to reconcile in the future? “There’s a battle going on between the two, but I think as a true Dallas show, anything can happen.”

It isn’t Dallas without conniving and plots of revenge. This season, Rebecca (now Pamela) has two motivations to destroy the Ewings: her father and Christopher. “Cliff (Pamela’s dad) has never had any nice things to say about the Ewing family,” Julie told us, “so I think she grew up listening to that. I think that most of the reason why she went on a two year con to trap Christopher into marrying her is because of her father. But, she is hurt. She definitely is hurt with the fact that Christopher never would have loved her as much as he loved Elena.”

Despite all the lying and scheming her character’s done, Julie still doesn’t see Pamela as a bad guy. “I don’t find her to be a villain in any sense of the word. I think she’s trying to make her father happy… I had a very different upbringing than Pamela did. But as an actor that’s the fun part for me. I get to explore that and I get to go into different levels that I’ve never been in. And I’m like ‘well this is great.'”

Although the success of Dallas has made Julie Gonzalo a household face, she’s still the same down-to-earth girl she always has been. “I definitely have a lot more fans, so it’s really great. To be honest with you, it doesn’t really change my personal life. I’m still the same person I was, you know, 20 years ago… I don’t really change whether I’m on a hit movie or a hit show.”

For those who can’t get enough of Julie and Pamela Barnes, be sure to catch all the drama Monday nights on TNT!