Dutch Queen Beatrix has announced she will abdicate the throne in favor of her eldest son, setting a precedent that some wonder if Great Britain’s Queen Elizabeth will follow. 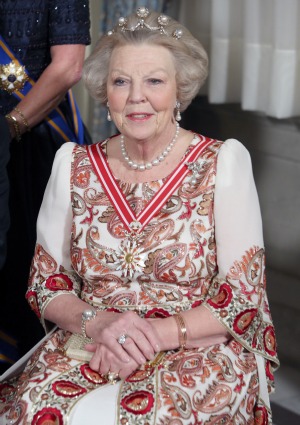 Queen Beatrix of the Netherlands has announced she will abdicate her throne to eldest son Prince Willem-Alexander so the nation can benefit from “the hands of a new generation.”

“He and Princess Maxima are fully prepared for their future roles,” Beatrix said in a short televised speech delivered from her Huis ten Bosch palace. “They will serve our nation with dedication, faithfully preserve the constitution and bring all their talents to the monarchy.”

Will Prince Charles finally be king? >>

“I am not abdicating because this office is too much of a burden, but out of conviction that the responsibility for our nation should now rest in the hands of a new generation,” she said. “I am deeply grateful for the great faith you have shown in me in the many years that I could be your Queen.”

The Dutch do not consider heading the monarchy to be a lifetime role; both Beatrix’s mother, Queen Julianna, and Grandmother, Queen Wilhelmina, abdicated as well.

But don’t expect the 75-year-old Queen Beatrix’s decision to influence her fellow royal Queen Elizabeth II of Great Britain in any way. The 86-year-old monarch, who just celebrated her Diamond Jubilee, has been on the throne for 60 years and counting with no sign of giving it up to the next in line, Prince Charles.

Now 64, many wonder if Charles will ever wear the crown or if he will choose to hand it over to Prince William. It seems clear that his mum has no intention of giving up before her death. In fact, the only British abdication in remotely recent history was that of Edward VIII, Elizabeth’s uncle who gave it all up to marry divorced American socialite Wallis Simpson.

Sorry, Charlie. You’ll have to wait your turn.

Kate Middleton’s royal birthday present from the Queen
Prince Harry nude photos: “I let myself down”
Editor hints at Will and Kate sex pics