Anne Hathaway is soon to find herself unemployed. What does a beautiful newlywed do with time on her hands? One key word she chose hints it might be time to work on those plans to start a family! 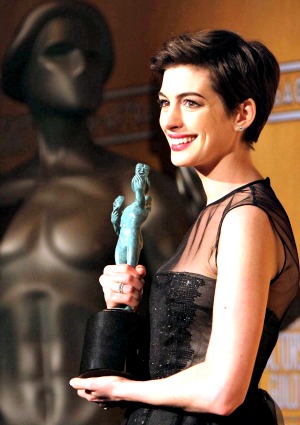 Anne Hathaway has found herself with an unexpected, much appreciated break coming up after the 2013 Oscar statues are handed out on Sunday, Feb. 24.

“I had a film lined up that we’ve taken a breath on,” the SAG Award winner for her role as Fantine in Les Miserables told Access Hollywood on Sunday. “I’m unemployed,” she added with a laugh.

“It’s such a funny experience to sort of be here and be in some ways at the pinnacle of what you can achieve as an actor, but also know that you don’t have a job. But that is the life of an actor,” she went on to say.

What will the 30-year-old, who wed Adam Shulman in late September do with her time off? Aside from what newlyweds are often known to do, she shared, “I’ll be hosting lots of dinners at my house.”

Very lightly hinting that her dreams of becoming a mother may now be on the short to-do list, Anne Hathaway added “We’re nesting and playing with the dog… We’re chilling. It’s good.”

Les Miserables review: And the Oscar goes to… >>

“Nesting!” Now, before you go thinking we’re blowing one word out of proportion, please recall this particular woman’s goal for 2013.