Mad Men star January Jones admits that too much hair dye is causing her hair to fall out “in clumps”. 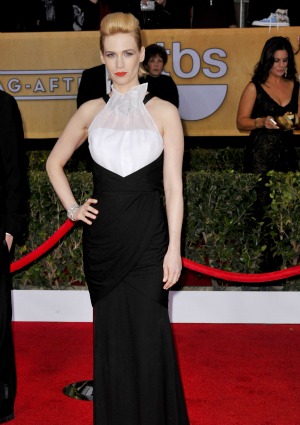 January Jones made a huge red carpet statement at the SAG Awards on Sunday night in her Prabal Gurung dress. However, it seems that Jones’ hair is making an even bigger statement by falling out.

In an exclusive interview with UK magazine, Grazia Daily, at the Sundance Film Festival, the Mad Men star talked about coloring her hair so often that it is now damaged.

She told the magazine, “I have been every colour and now my hair is falling out in clumps. I’ve been blonde, red with extensions for this film, then blonde, then black, and now blonde again. I’m going to have to shave it off and wear a wig.”

On Sunday, her hair was blonde and styled in a swept up, avant-garde faux-hawk that complemented her modern black and white gown. Fortunately, the photographs didn’t pick up any hair loss on the stunning actress.

Jones has been in the midst of filming season six of the AMC drama where her character, Betty Draper-Francis, is known for her blonde locks. What does Jones prefer though?

She said in the interview, “I like it all colors, it makes you feel different according to what color it is, but I prefer to be blonde. My son recognizes me in photos when I am blonde, he says ‘mama.'”

It will be interesting to see what she does next with her hair once the season finishes shooting. Jones doesn’t hire a stylist for her red carpet events, so you never know what look she will come up with next.