Taylor Swift is determined not to let one of the great loves of her life get away.Celebrating one of her longest relationships ever, the songstress has announced she and Diet Coke are going public as a duo. 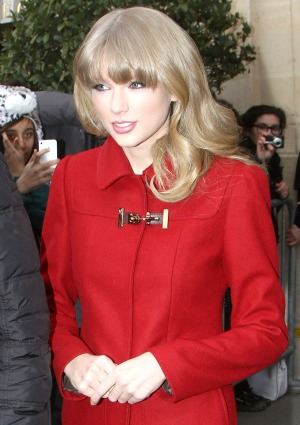 Taylor Swift and Diet Coke are going public with their years-long romance. While the singer’s string of famous ex-boyfriends has become the stuff of entertainment gossip, one diet soft drink has apparently been by her side all along.

Announcing she and and Diet Coke are never, ever breaking up, Taylor Swift posted the video below on YouTube on Monday.

“I wanted to share some news with you because we’re actually making it official with one of the great loves of my life… Diet Coke,” the Red singer, seen here wearing just that on Monday in Paris, began.

While Taylor Swift’s Diet Coke message was short and sweet, a company spokesperson had this to say about their brand’s new hook-up:

“Taylor’s unmatched business savvy, talent and drive to succeed are an inspiration to everyone. She’s an extraordinary individual and a wonderful symbol of achievement. Taylor tells us that every day Diet Coke plays a small part in helping her stay extraordinary. It’s one of the many reasons she’s the ideal partner to represent our brand.”

No word on how long Taylor Swift and Diet Coke are set to make beautiful endorsements together, though Coca-Cola did say she’ll be featured in the brand’s television, print and digital advertising beginning this spring.

Could there be more to the story for the ex-girlfriend of Harry Styles, however? One YouTube commenter noted, “Taylor’s biggest revenge !!! One direction advertises Pepsi so she advertises coke lol.”

Do you think teaming up with Taylor Swift was a wise move by Diet Coke?