Tragedy upstairs is mixed with drama and good news downstairs. What’s next? 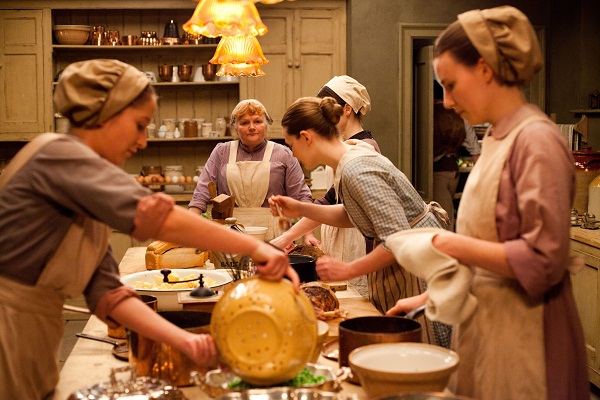 This time on Downton, Sybil’s passing doesn’t hurt just the Crawleys. The servants working in the basement are also terribly hurt by the loss. Sybil was, without a doubt, the kindest of the sisters and her death is a loss for the help, too. They all grieve hard at her passing, but perhaps none more than Thomas. She was one of the very few people who had ever offered him kindness. His sadness was awful to watch.

When Daisy asks what they can do for the family, Carson has just the right answer, of course. “Carry on, Daisy,” he tells her and the rest of the staff. “As we all must.”

There is a glimmer of hope downstairs (and up, of course) thanks to Anna’s diligent work to uncover the truth behind Mrs. Bates’ death. Anna and Mr. Baker finally figured out how the former Mrs. Baker framed him: She poisoned the pastry. She didn’t just kill herself, she killed herself and made sure to set it up so it looked like he’d murdered her and would have gone to prison for it. Sweet revenge, I guess?

There’s other drama worth noting, though, and it includes two new hires for the Crawley family.

First, Widow Crawley adds to the “downstairs” team when she hires Ethel (though technically she’ll work in the Widow Crawley’s residence and Downton proper, but still). After giving her child away, she’s still having a hard time getting a job after being a prostitute. They think if she works at Downton for a while, she’ll have a reputable former career and a good reference and can move on to other jobs. Not everyone is happy about it, though. When Mrs. Bird threatens to leave, the widow she lets her. Ha!

Finally, there’s another new girl, Ivy, making waves at Downton as well. Daisy gives Ivy a rather hard time in the kitchen: she piles on the work and demands perfection. The boys are all over Ivy and it’s pretty obvious that Daisy’s a bit jealous. When Ivy ruins some food, one of the boys even comes to her rescue.

As we leave Downton, things are still in a state of upheaval over Sybil’s absence, the birth of the new baby and the disruption in staff. If previous incidences are any sign, though, those downstairs will help the Crawleys pull through mostly unscathed.