Oh, the drama! The heartache! It’s too much to bear! Why am I still watching this show? 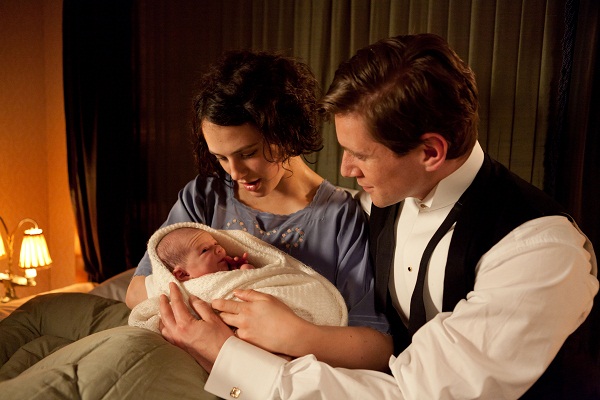 I interrupt your regularly scheduled Downton Abbey recap to bring you breaking news: Sybil is dead!

Nothing is right with the world.

Seriously. She has the baby and she says, “I just want to sleep, really.” Shouldn’t that have been a sign? When she’s seizing and stiffening and her entire family is freaking out around her… holy crap! What an absolutely intense and awful moment. And then Tom shakes her to try to wake her and whimpers for her to “please wake up, love.” Tears. So many tears.

And, of course, Lord Grantham says, “This can’t be. She’s 24 years old.” As if that means anything. Ever.

The last conversation Cora and Sybil had was when Sybil asked her bother to help her make her father more forgiving and accepting of Tom Branson.

As with all things at Downton, though, there was more to the story than just Sybil’s passing and the family’s mourning. For starters, before Sybil passed, she had a sweet baby girl.

There may or may not be more babies on the way, too.

Matthew is worried he and Mary might have issues having children. They’ve been trying for months and still no baby. While the doctor was in to help with Sybil’s birth, Matthew asked him if his injuries sustained in war might have something to do with being unable to conceive a child. The doctor brushed off the thought and told him to stop worrying as long as “everything is working properly.” But will this turn out to be something more?

Matthew’s also concerned about the estate. Even with his money, things are still going to ruin because Lord Grantham feels too mean in demanding too much of the tenants on various parts of his family’s land. People are barely paying their rent, much less taking care of the land as they’re supposed to.

Matthew doesn’t mean to talk about business during such an awful time, but while the family’s lawyer is already there, he pulls him aside. Of course, Mary walks in on the conversation and she’s ticked. It seems like nothing will ever go quite right for Mary and Matthew.

Then again, nothing is going quite right for anyone at Downton these days.