On Sunday, Norah Jones was added to the 85th Annual Academy Awards lineup to perform the Oscar-nominated song “Everybody Needs a Best Friend” from the movie Ted. 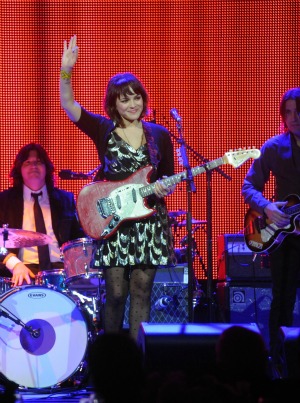 The 85th Annual Academy Awards show is proving to be a powerhouse of musical performances this year. Last year, the executive producers, Brian Grazer and Don Mischer, chose not to have any of the Best Original Song nominees onstage. This year’s executive producers, Craig Zadan and Neil Meron, are making the show one big musical fiesta from start to finish.

On Sunday, The Academy of Motion Picture Arts and Sciences announced that Norah Jones would be joining the star-studded night to perform the Oscar-nominated song “Everybody Needs a Best Friend” from the movie Ted. The song was written by Oscar host Seth MacFarlane, with music by Walter Murphy.

In a statement, Jones said, “I had such a great time recording this song with Seth, and was thrilled to find out that it was nominated for an Oscar. Getting to perform it at such a prestigious event, which my friend is hosting, is a once in a lifetime opportunity.”

The Grammy Award winner joins the musical slate that includes Adele singing “Skyfall” and a musical tribute to Dreamgirls, Chicago and Les Misérables. The performers involved in the movie musical number have yet to be announced.

Either way, it’s unusual to have the Oscar host also double as a nominee. The producers said in a statement, “We are happy to have Norah Jones perform Seth’s and Walter Murphy’s nominated song on our Oscar telecast. We are big admirers of Norah’s singing and she will help celebrate the unique circumstance of having an Oscar host who is also nominated for Best Original Song.”

Jones is best known for her debut album Come Away With Me, which was released in 2002 and sold over 10 million copies. The critically acclaimed record also earned her five Grammy Awards that year.

The 85th Annual Academy Awards will be televised live from Hollywood on Feb. 24.

Read more on the Academy Awards:

From dining to decor: A sneak peek at the Governors Ball
Zoe Saldana and Chris Pine to host the Sci-Tech Awards
The top 5 things you didn’t see live at the Oscar nominations