Actor Diggs displayed a fine bit of derring-do on Sunday, chasing down a home invader and holding him until police officers came. 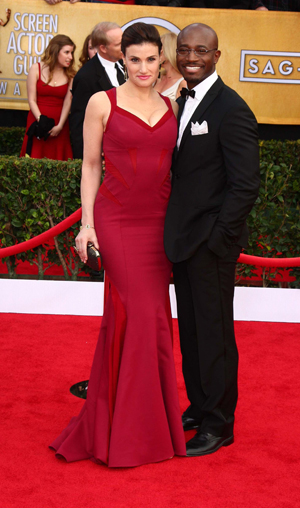 When How Stella Got Her Groove Back hottie Taye Diggs arrived home from the SAG Awards last night, he got a surprise he hadn’t bargained for: He walked in on a thief who had broken into his place.

The 20-year-old suspect, whom E! News reported is named Hassan Juma, ran away on foot.

Rather than sagging to the ground in relief, Diggs actually chased Juma down and held him there until police arrived, a spokesperson for LAPD Media Relations confirmed with E!

What a superhero! Who knew groovy/hippie-ish Dr. Bennett on Private Practice could be such a criminal-chasing superstar?

Of course, Diggs fans will remember that he was a Secret Service agent guarding the president’s daughter on The West Wing, so maybe this isn’t so surprising.

Juma has been arrested and booked for felony burglary. His bail is set at $50,000. He is still in custody.

Diggs was at the awards with Broadway-queen wife Idina Menzel to present an award with Cougar Town actress Busy Philipps. Diggs and Philipps presented the award for Outstanding Performance by a Female Actor in a Drama Series to Claire Danes for her role on Homeland.

Say, what do you suppose Menzel did while her husband was chasing down their home invader? If it’d been me, I would have been shrieking for my husband to come back right now, you fool, he could have a gun! But that’s why my family’s hijinks are never reported on TMZ. That, and the fact that we’re not famous.