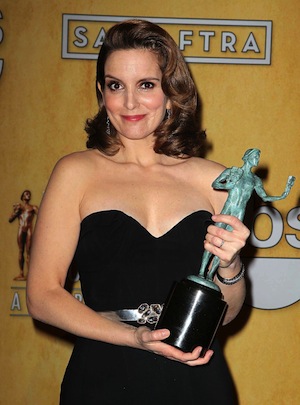 Tina Fey did her best to liven up the 2013 SAG Awards on Sunday night — notably, Mean Girls fans perked up when Fey told E! News a Mean Girls musical is in the works. Tina Fey wrote the original screenplay for the 2004 hit which starred then-Hollywood darling Lindsay Lohan.

How to deal with real-life mean girls >>

Fey told Giuliana Rancic on the SAG Awards red carpet that she hopes to see a Mean Girls musical come to life. “I’m trying to develop it with my husband, who does all the music for 30 Rock and I think Paramount (Pictures) is onboard.” While there is no word yet on potential cast members — Lindsay Lohan likely won’t be asked back for the stage adaption — Fey did mention that one particular Mean Girls fan could be a part of the musical: Mariah Carey.

During a recent American Idol episode, Mariah Carey and Nicki Minaj were arguing over Mean Girls and the names of the characters. Mariah expertly explained to Minaj that the main villain was Regina George. Fey told E! News she was aware of the argument between Carey and Minaj and she thinks Mariah is suited to play Regina George’s mother, played by Amy Poehler in the 2004 film. “Maybe she can play Amy Poehler’s part in the musical.”

While we love the idea of Mariah Carey on the Broadway stage for a Mean Girls adaption, we’re not sure about Carey’s acting chops — we still have Glitter memories haunting us. What do you think of a Mean Girls musical?

Watch the Mean Girls comment from American Idol below: