You may have become more familiar recently with Eddie Redmayne for his performance in Les Misérables. He’s had our attention for a while now, and we’ve assembled a collection of our favorite Eddie moments. You’re welcome. 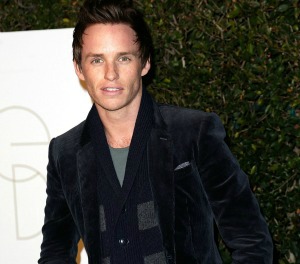 Ever the supportive husband

Poor William Stafford, the long-suffering and loving husband to Mary Boleyn, who was forced to sit by and watch his wife carry on an affair with the king, for, as Mary’s mother put it, “the advancement of men.” Eddie’s character’s love and devotion to Mary in The Other Boleyn Girl may be where we first noticed his incredible head of hair, charming freckles and coy smile. Sadly, William doesn’t even make an appearance in the trailer for The Other Boleyn Girl, so we share with you now a delightfully cheesy montage that gives us what we so desperately seek: a healthy dose of Eddie.

The Oscars will honor the movie musical >>

Eddie Redmayne is quite possibly the best-dressed man in Hollywood. How does he make such a well-fitted suit look so casual? In People magazine, Eddie credits his girlfriend Hannah Bagshawe (yes, we are gritting our teeth that he has a girlfriend!) with his style. He tells People, “I’m color-blind. I’m confused with colors,” which is where his lady friend steps in to save the day. Eddie is also a successful model, as you’ll see in this Burberry ad. Just one question before buying this trench coat: Does Eddie come with it?

A week with Eddie

Check the “yes” box if you were skeptical about Michelle Williams playing the most famous sex symbol of our time, Marilyn Monroe, in My Week with Marilyn. After watching the movie, we still weren’t really buying it, but here’s what we were buying: heady Eddie. Didn’t he steal our hearts just a bit as the naïve Colin Clark, who fell under Marilyn’s charm and tried but failed to save her from herself? We don’t much care for how Marilyn treated our darling Colin, and so we’ve chosen this clip where Eddie asks out the reluctant Lucy (played by Emma Watson).

Last but certainly not least, we visit Eddie’s latest success in Les Misérables, which has already won several awards and is nominated for eight Oscars. But enough about that. Les Mis gave us an opportunity to sit and watch Eddie for over 2-1/2 hours! In an otherwise dark and at times depressing and dreary movie (who forgot to pay the light bill on that set?), Eddie’s Marius is a brave, dashing, principled and charming suitor. Of all the interviews Eddie has done for Les Mis, his chat with Ellen DeGeneres is our favorite. We not sure if it’s because he’s discussing our other British crush, Prince William, or because Eddie flashes his brilliant smile or because his suit nearly matches Ellen’s. Behold: