In a harrowing escape, rapper Rick Ross evades a drive-by shooting in Florida by crashing his Rolls-Royce into a residential complex. 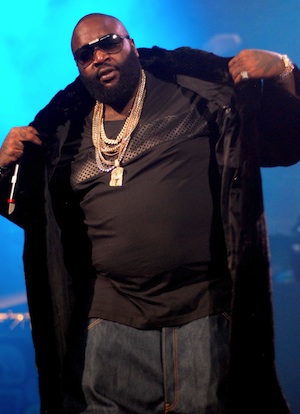 Rick Ross is lucky to be alive. Ross was the victim of a drive-by shooting that could have taken his life early Monday morning in Fort Lauderdale, Florida. Fort Lauderdale police talked to the Huffington Post and confirmed shots were fired at Rick Ross’ Rolls-Royce around 5 a.m. on Jan. 28, 2013, on a major Fort Lauderdale street. Ross was a passenger in the car with his girlfriend, Shateria L. Moragne-el. Neither Ross nor Moragne-el were injured.

Witness told police they heard about 15 shots and a local news station says “dozens” of shell casings were found at the scene of the drive-by shooting. NBC news affiliate WTVJ in Miami says Ross and his girlfriend attempted to drive away from the gunfire but crashed into an apartment complex. In a statement to the press, Fort Lauderdale Police spokeswoman Detective DeAnna Garcia said Rick Ross and Moragne-el were lucky to be alive.

“The occupants of the vehicle have asked for their information to be withheld from being released,” Garcia said. “They obviously, with everything that just took place, are fearful for their lives and their families’ lives.”

Police are investigating the drive-by shooting incident and so far no motive for the crime has been released.

Watch more details on the Rick Ross drive-by shooting incident from WTVJ below.