February’s Girl Crush Maria Menounos juggles several jobs, five dogs and a relationship that’s been going strong for over 15 years. Find out how this superwoman keeps it all together. 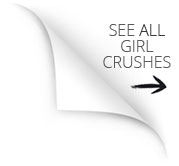 February’s Girl Crush Maria Menounos juggles several jobs, five dogs
and a relationship that’s been going strong for over 15 years.
Find out how this superwoman keeps it all together. 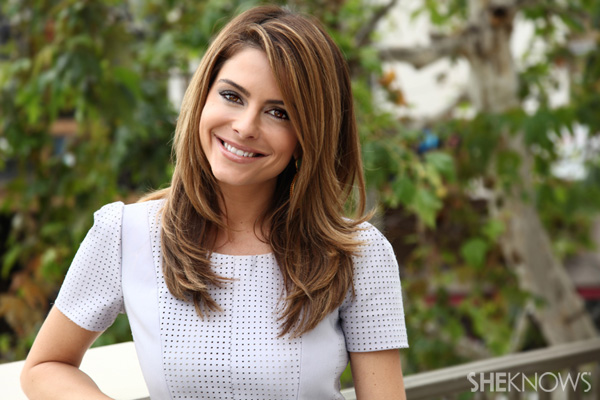 When we showed up at La Piazza, a popular Italian restaurant at The Grove in Los Angeles, we immediately spotted Extra host Maria Menounos, quickly stuffing down a plate of pasta and still sporting the gorgeous lilac dress she’d worn minutes ago on the show.

For more pick up Maria’s book, The Everygirl’s Guide to Life .

“I don’t starve myself,” the gorgeous Menounos told SheKnows. Even though we’re mid-award season, Menounos, who counts Jessica Biel as her body idol, says she usually eats healthy so that she can enjoy herself at times like this.

“I love to get loaded potato skins or pizza or cheeseburgers,” said Maria. “So I try to eat healthy as much as I can so that when I want to, I can go a little crazy.”

Maria was taking what was sure to be one of her only breaks of the day in between shooting Extra, sitting down with us and then jumping on a conference call. As one of the most popular hosts in Hollywood — I mean, who else has an inside joke with Johnny Depp — it’s no surprise that this girl is in demand. But Maria is humble about her success, and explains why it’s well deserved.

“People see your life so different because they see your tweets and your Instagram,” said Maria. “They don’t see all the hard work that goes into it.”


In addition to hosting Extra full time, Maria runs the online TV network afterbuzztv.com, which she created with her boyfriend of 15 years Keven Undergaro. While she mainly manages the site, Maria also hosts a recap of her favorite show, Breaking Bad. She is also an actress, producer and author , and she has a reality show in the works with Oxygen.

“We do work around the clock,” she told us. Still, that may be one reason her relationship has worked so well. “You know we kind of came up the path together, helped each other. And he makes me laugh all the time, so that’s always a good thing. You know, we just like to be together.”

The couple enjoys doing activities together as opposed to the traditional dinner date. Pro wrestling and Celtics games are just two of their favorite things to do.

“I feel like dating is what you do in the very beginning, and then after that you’re a team,” said Maria.

As a team, the two have decided not to do Valentine’s Day gifts, and instead choose to woo each other with simple gestures. “We don’t really do gifts. I say to women, ‘Stop expecting so much from men because you’re setting yourself up for disappointment inevitably.’ [Keven] writes really beautiful cards and letters. I love those because those are timeless. I get to keep them forever.”

And while some may question why these two haven’t tied the knot after all these years, Maria says she doesn’t feel the need for a title. 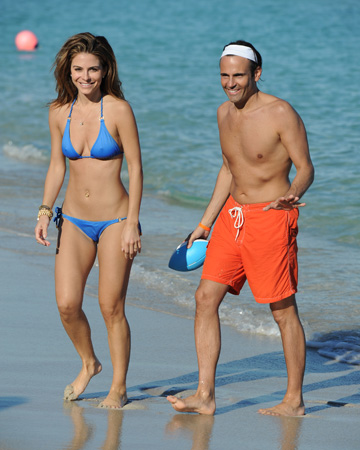 “We’re both like fish on the subject, we just flip and we flop,” Maria laughed. “There are times when we are like, ‘Oh, we should do it!’ But you know, I also feel like we’ve been together for such a long time. In my mind, we have been married. So I don’t really see the difference.”

It’s not out of the question, though. Maria says she thinks they’ll eventually take the plunge. But the two have very different ideas of what the big day would look like.

“I’m like, ‘Let’s do it on a yacht in Greece, with just five people.’ And he’s like, ‘No. I want a big event.’ He’s the diva. I’m not someone that’s dreaming of my wedding day. I get glammed up with hair and makeup every day for work. I get beautiful dresses for the award shows. So I’m like, ‘I don’t need that, because that’s something special for women who don’t get what I get every day.’”

As for having children, Maria says it’s a possibility, but the two already have their hands full with five furbabies.

“The kids topic is interesting too,” Maria told us. “There are days when we’re like, ‘Yeah, we could do it.’ And then there are other days when we’re like, ‘What are we thinking?’ We have lots of [dogs]. We have Winnie, who is our newest rescue; Athena, Baby, Benjamin and Apollo. I feel like we know what we’re doing for when the time comes [for a baby].”

For now, though, she’s focusing on work and her upcoming reality show, where these topics may be sorted out for all eyes to see.

“Keven and I are doing a docu-series with my parents, and our family and friends,” said Maria. “We haven’t started filming yet, but at some point this year we’ll start filming it and we’ll see what happens. Definitely all the things you’re asking me are the same things my parents are asking me about. So we’ll wrestle through some of those topics and see what’s going to happen.”

Somehow we’re sure this multi-tasking maven will figure it out!

Be sure to catch Maria every day on Extra on NBC, and read on for our Girl Crush Quickie >>