The legendary journalist missed President Obama’s second inauguration because of a fall, but it looks like it was all caused by chicken pox, a disease she never had as a child. 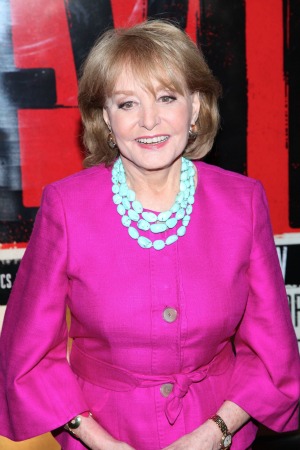 Barbara Walters has been under the weather lately, to say the least. The journalist fell on a stair over the inauguration weekend at the British ambassador’s residence due to an illness. She was taken to the hospital by ambulance as a precaution.

But it looks like Walters finally has a diagnosis. Her View co-hosts made an announcement on the show Monday morning.

“We want to give you an update on Barbara,” Whoopi Goldberg said during the show. “You all know that she fell and cut her head 10 days ago, and then was running a temperature, but it turns out it is all the result of a delayed childhood. Barbara has the chicken pox. She’d never had it as a child. So now she’s been told to rest, she’s not allowed any visitors. And we’re telling you, Barbara, no scratching.”

The disease can be dangerous for an adult, but it looks like Walters is taking it in stride. Last week in a statement, she said she wanted to “thank all the people who have called, written and been concerned about me”.

The doctors said that Barbara being Barbara is a good sign!

“Out of an abundance of caution, she went to the hospital to have her cut tended to, have a full examination and remains there for observation,” said a statement from The View after the fall. “Barbara is alert (and telling everyone what to do), which we all take as a very positive sign.”

For 83 years old, Walters is still very much involved with her career, and busy on a daily basis. On top of her job at The View, she still helps ABC with special reports (such as the inauguration ceremony) and puts together a list of her Most Fascinating People each year. You can bet the chicken pox won’t slow her down for too long.

Her View co-hosts already miss her and hope to have her back soon (just as long as she’s healthy).

“We love you. We miss you. We just don’t want to hug you,” Goldberg added in her message to Walters.