Chris Brown finally picks on someone his own size… over a parking spot. That’s not very gangster, Breezy. (P.S.: It appears no cars were harmed in the making of this publicity stunt.) 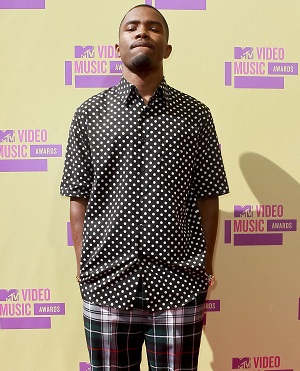 Chris Brown and Frank Ocean roughed each other up last night in a parking lot.

According to bystanders, the tussle started over a parking space in a lot outside a recording studio in Los Angeles. At some point, Brown and Ocean went to shake hands and someone from Ocean’s entourage jumped in for a punch. Things escalated quickly. After that, things get shady.

According to TMZ, though, Brown left the scene while Ocean stayed to talk to the cops, making him the “victim” in the scuffle. They’re also claiming Ocean says Brown punched him.

While we’re not sure how true that is (and may never know, it appears no one wants to press charges), we do know Ocean was injured during the brawl, as he mentioned in tweets following the events.

“got jumped by chris and a couple guys. lol. i only wish everest was there.” Ocean tweeted, referring to his dog, Everest. He also added, “cut my finger now I can’t play w two hands at the grammys.”

This new beef between the two hip-hop artists is far from an isolated incident. Ocean and Brown have been sparring via Twitter since last summer. Ocean, who was originally a member of the rap group OddFuture, began tweeting Brown after Brown and Odd Future member, Tyler The Creator, began arguing over Tyler’s offensive music.

Later, Brown compared Ocean to songwriters James Fauntleroy and Kevin Cossom. Ocean didn’t take to kindly to that and fired back with a comparison to Ike Turner and Sisqo.

Finally, things really got heavy when a reporter asked Brown his thoughts on Ocean’s sexuality. Brown’s reply: “No Homo.” Classy. Later, he tried to back pedal by tweeting, “…Love who u wanna love. It’s ur decision…” It was too late for a lot of Ocean fans and gay rights activists, though.

Whoever started the fight in the parking lot clearly hasn’t gotten over it either. Hopefully, in the future the bickering stays mostly on Twitter and off the streets.