Earthy and homey, this track is pleasing to hear and the video touching to watch. 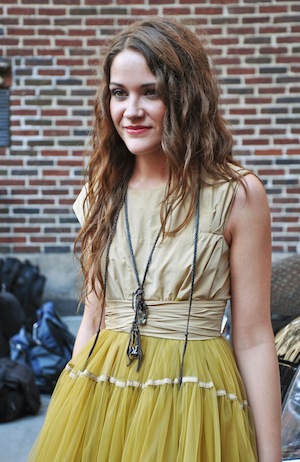 A humble girl, not hungry for the spotlight

CBC writes in an article about Sierra Noble: “She has opened for Paul McCartney and Bon Jovi and taken part in the 2010 Winter Olympics opening ceremonies, but fiddle player Sierra Noble says she never planned to step up to a microphone to sing.”

She even wrote songs, and her first single, “Possibility,” was only sung by her because no one else was available to do it, according to the same CBC article. We’re lucky she did, because this wholesome and whimsical singer really has authentic talent that shines through on-screen.

Innocence and a sunny take on life are combined in this warming music video about love. Love not just as we know it regarding romance, but the love we have for family, or the love we should have for humanity.

It’s refreshing to witness another artist come forward with such a noble intent. I haven’t been impressed by motivation like this since Alanis Morissette. Sierra Noble’s goal is to drive home that perspective is key in executing love — and though her view seems a little hippie-esque, her cotton candy-sweet voice aided by her pure-as-snow attitude make you feel better after watching.

The locations are beautiful, and are a nice pick-me-up if you can’t afford to travel right now. The pleasant appearances by average people are depicted in a heartfelt way, drawing your attention to the people and casual occurrences that often are overlooked but are meaningful nonetheless. So if you need to slow down and remember why this world is a good place, watch this video and let us know what you think!

Want to see what else we recommend? Check out other editor’s picks: