This gem from the CW network has found her way to transition into music, and in her latest music video proves she has some serious staying power. 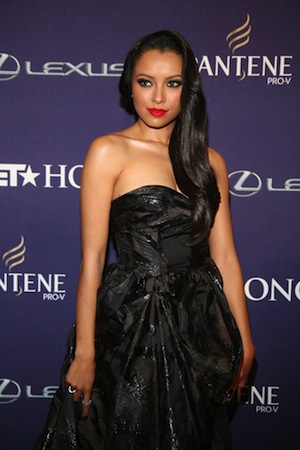 Bonnie, is that you?

In the same way I’m sure Taylor Momsen refuses to be typecast by Gossip Girl, Kat Graham, who plays Bonnie on The Vampire Diaries (alongside the unfairly handsome Ian Somerhalder and Paul Wesley), has her frustrations.

Instead of overdoing it with a polar opposite persona from her character, she seemingly embraces her fame and just provides a sexier appearance.

Her character on the show is fearless and wise, and if it’s anything like her true identity, it sure has found its way to creep into her music.

She’s spunky and wild, but tame enough to be classy. And this video only confirms any question of how hot she is, both physically and musically.

Who needs a gym when you can dance like that?

This music video testifies how talented this young woman is as a dancer, too. She and her set of dancers dazzle the screen in a way I found both impressive and bewitching. Ironic that she plays a witch on the show too, huh?

I couldn’t pinpoint any comparable artist, but the feel of the video was that of a Nicole Scherzinger or perhaps a Cheryl Cole number: sexy, seductive and sheer femininity. If her dancing both surprises and intimidates you (like it did me), it’s because she actually does it professionally in addition to her acting/music career.

It’s a different perspective into the world of Bonnie, who on-screen is in the background while other stars take the reins. We get to see her at the forefront in her music video, no longer portraying the profound, direct and responsible Bonnie Bennett, but the confident, extra-sassy and sexy Kat Graham.

Watch and let us know what you think!