The actress/singer is pretty busy these days, having put her wedding in last place many times. But when it comes to importance, Liam is number one in her life. 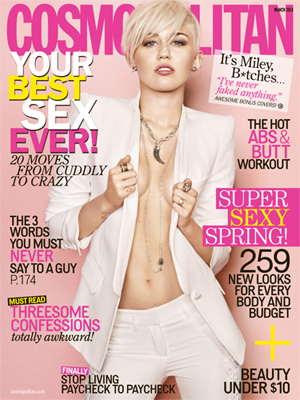 Miley Cyrus landed the cover of Cosmo this month and she dishes on her love life, as well as some other important aspects of her life. And she does it all with no bra. The actress posed on the cover of the magazine in only a little more than a jacket.

The Cyrus continues to show us that she is growing up, and there is (hopefully) a wedding in her future as well. Despite constant rumors the two are on the rocks, it looks like Cyrus and her fiancé Liam Hemsworth are very much still together, and still in love.

The magazine asked Cyrus to rank the important things in her life, whether it be love, family, music or acting. Her answer was not that surprising.

“Number one is my relationship with Liam,” she told Cosmo. “That’s what I feel the most confident in, because you never know; there’s so much hype behind my new record, but it could come out and, worst-case scenario, everyone f***ing hates it.”

But for her, Hemsworth is one thing she knows she can always rely on. She grew up as Hannah Montana on the Disney show, but she feels that she has grown up, and is glad she took the time to do that.

“I think the best thing I could have done was take those two years off to really live, because now people don’t think of me as who I was on the TV show,” Cyrus said, according to the Huffington Post. “Some of the worst things that have happened in my career, like things getting leaked, have actually been what’s best for me, because people knew when I was on that show that I was really growing up. I never faked anything. I never played the Disney game of smiling and being a princess and then suddenly having a hard time, saying, ‘That isn’t who I really am.'”

Cyrus and Hemsworth are (in theory) planning a wedding, although they haven’t said much about it. Cyrus is also working on a new album.