This reinvention of the classic Grimm fairy tale was anything but grim at the box office this weekend, but how did the other newcomers fare? Let’s just say there’s no gingerbread house for Parker or Movie 43. 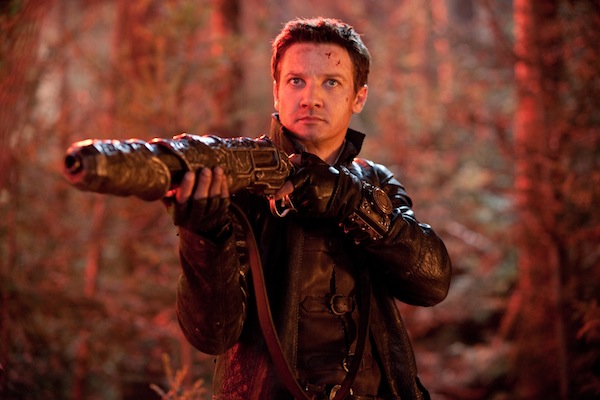 Earning $19 million, Hansel and Gretel: Witch Hunters opened at the top, despite its unusual take on the famous brother and sister duo. Portrayed as adults, Hansel and Gretel are armed with guns and travel from village to village taking down witches. Due to his childhood trauma of being fattened up by the evil witch in the candy house, Hansel now suffers from “the sugar sickness” and must give himself daily injections. Who knew diabetes would make its way into a fairy tale?

Horror movie Mama floated from No. 1 last week down to a not-so-scary No. 2, still earning almost $13 million over the weekend. Jessica Chastain’s next project is The Disappearance of Eleanor Rigby: Hers, which, according to the IMDb, is about “a New York couple’s relationship as told by the wife.” Anybody know a good divorce attorney?

At No. 3 this week is Silver Linings Playbook, starring Jennifer Lawrence and Bradley Cooper as a couple struggling to cope with the challenges of mental illness and depression. Earning $10 million this weekend, however, should boost anyone’s spirits.

The manhunt mission Zero Dark Thirty went from second to fourth place this weekend while still earning a stealthy $9.8 million. Audiences don’t seem to find this drama torturous at all, despite its many scenes depicting torture.

Shocking, bloody and funny, Django Unchained moved up in rank this week from No. 7 to No. 6. Seems word of mouth is helping Quentin Tarantino’s movie about a bad*ss slave stay relevant.

Opening at No. 7 is the massively raunchy, potty-humored Movie 43, which offers at least 43 ways to get sick to your stomach. Despite an all-star cast that includes Kate Winslet and Halle Berry, many critics are branding this crude-com as the worst film of 2013. You can check it out at a urinal near you.

Film noir Gangster Squad moved from No. 4 to No. 8 this weekend, racketeering $4.2 million. Despite the heated debate about guns and violence, audiences sure like their movies with big body counts.

At No. 9 is Catherine Zeta-Jones’ Broken City, about a crooked cop (Mark Wahlberg) and a malevolent mayor (Russell Crowe). This crime story embezzled $4 million from audiences over the weekend.

The musical about the wretched ones, Les Misérables, is waving the French flag from position dix, earning $3.9 million this weekend and delighting Francophiles and audiophiles alike.