Marvel is taking their films to a higher level. The Avengers was just the tip of the iceberg. Studio president Kevin Feige has revealed the next step in the studio’s cinematic journey. 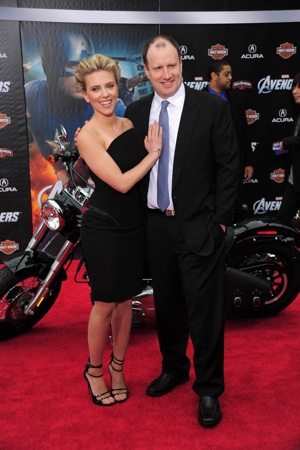 The Avengers was the highest-grossing film of 2012. It earned over $1.5 billion worldwide. That’s a hard act to follow, but Marvel Studios is up to the challenge. Kevin Feige recently told MTV about their next phase of films.

Every movie from Iron Man to The Avengers was part of what Marvel calls Phase One. Phase Two covers the next few years, with Iron Man 3, Thor: The Dark World, Captain America: The Winter Soldier, Guardians of the Galaxy and The Avengers 2.

The studio’s already working on their third act, which will kick off with Ant-Man and Doctor Strange.

“Ant-Man is definitely part of Phase Three,” revealed Feige. “Like Iron Man 3, it’s certainly set in the Marvel Universe, but it’s also through the lens of [director] Edgar Wright — which is the only reason we’re making the movie.”

Wright presented a test reel at last year’s San Diego Comic-Con. It was a crowd-pleaser, which let Marvel known they’re going in the right direction.

“It’s very much an Ant-Man origin movie from the perspective of Edgar Wright and his co-writer Joe Cornish. It will of course be firmly planted in the MCU [Marvel Cinematic Universe], but a different corner than we’ve seen before.”

As for that long-awaited Doctor Strange movie…

“Doctor Strange, which I’ve been talking about for years, is definitely one of them,” he confirmed. “He’s a great, original character, and he checks the box off this criteria that I have: he’s totally different from anything else we have, just like Guardians of the Galaxy. He’s totally different from anything we’ve done before, as is Ant-Man, which keeps us excited.”